Book of Dead is definitely the most popular Ancient Egypt-themed slot ever launched. In fact, it made Play’n Go, the software provider behind online slots, well-known among casino players and encouraged them to produce more engaging titles like Reactoonz, Moon Princess, and Fire Joker.

In this Book of Dead slot review, we are going to uncover all its mysteries

You will see exactly how the game works, what payouts you can expect, and whether it's genuinely worth playing or just incredibly overhyped by the casino community. Without further ado, let’s grab our torches and head straight into the review, shall we? 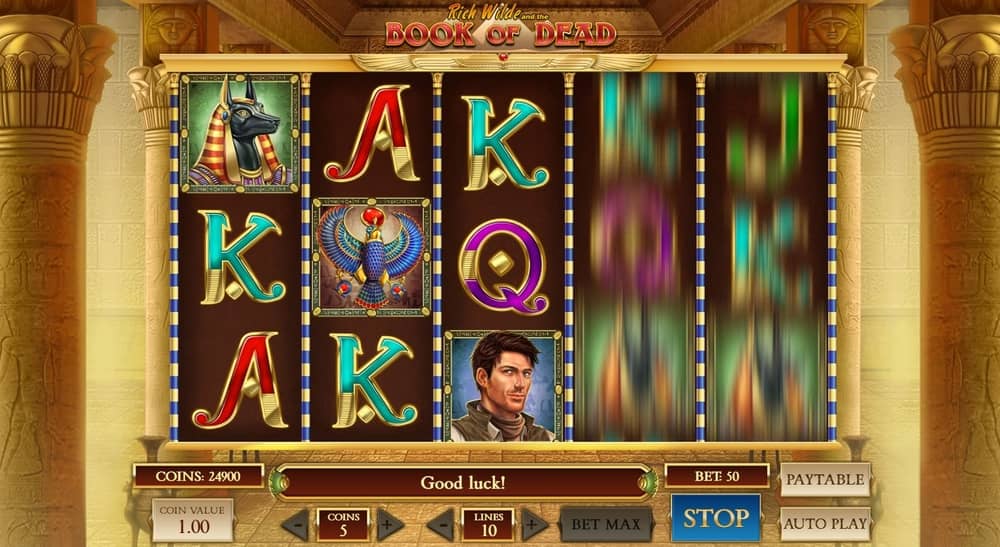 The game’s title: Book of Dead, refers to a series of papyrus scrolls that describe the ancient Egyptian funerary process, also translated as Book of Coming Forth by Day and Book of Emerging Forth into the Light.

The ancient Egyptians believed that if one passed away, one’s soul would be weighed against a feather and when lighter than the feather, they would pass into the afterlife by not committing any crimes and other bad stuff in life.

Often the Egyptians would accompany their deceased ones with these kinds of scrolls, wishing them sort of good luck in the journey to the afterlife.

And that same good luck is exactly what you need when playing the Rich Wilde’s Book of Dead online slot machine game that is centered around this theme!

The slot features card symbols like Q, J, K, and A in hieroglyph style, masks of Anubis and Toth, scarabs, the Book of Dead, and Rich Wilde himself. The betting interface underneath the slot is displayed in ancient Egypt style, with all the texts of the buttons carved into blocks of sandstone.

Overall we must say that the slot is just incredibly well designed, and the aesthetics are very pleasing.

The background music is fantastic and really gives that exciting ancient Egypt vibe to the game. Anyway, enough history class, let’s see how the game is actually played.

How to Play Book of Dead Slot 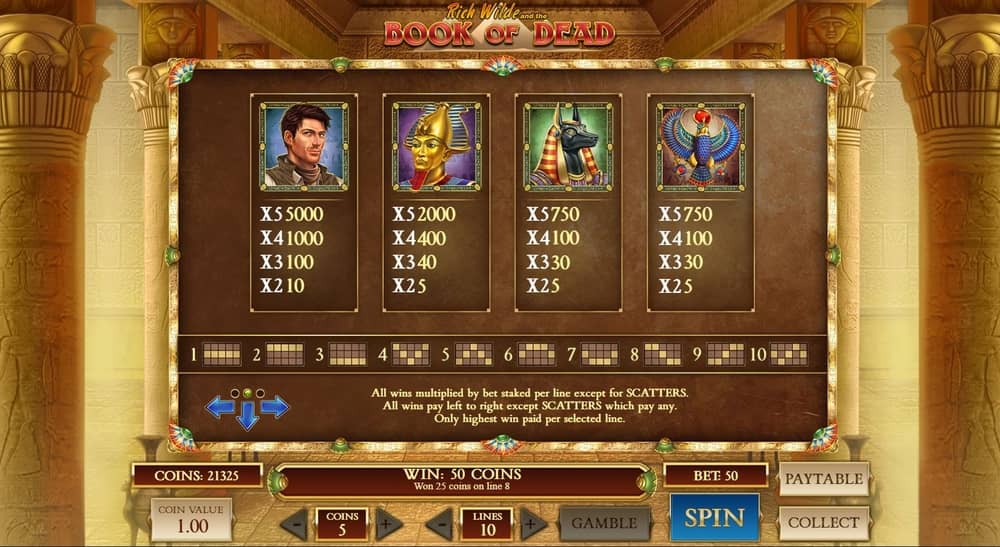 The Rich Wilde’s Book of Dead slot is a very easy-to-understand and straightforward casino game that every casino player should get the hang of within minutes.

It has a traditional slot machine layout of 3 rows, 5 reels, and 10 paylines. I

n the betting interface, you can see the current coin value, the number of coins you’re wagering per spin, the spin button, a bet max button, an autoplay button, and a paytable button you can press to see some more information about the game.

To get started playing Rich Wilde’s Book of Dead by Play’n Go simply follow these steps:

This gives you great flexibility and allows for proper bankroll management while playing this game.

Book of Dead by Play’n Go Minimum and Maximum Bets 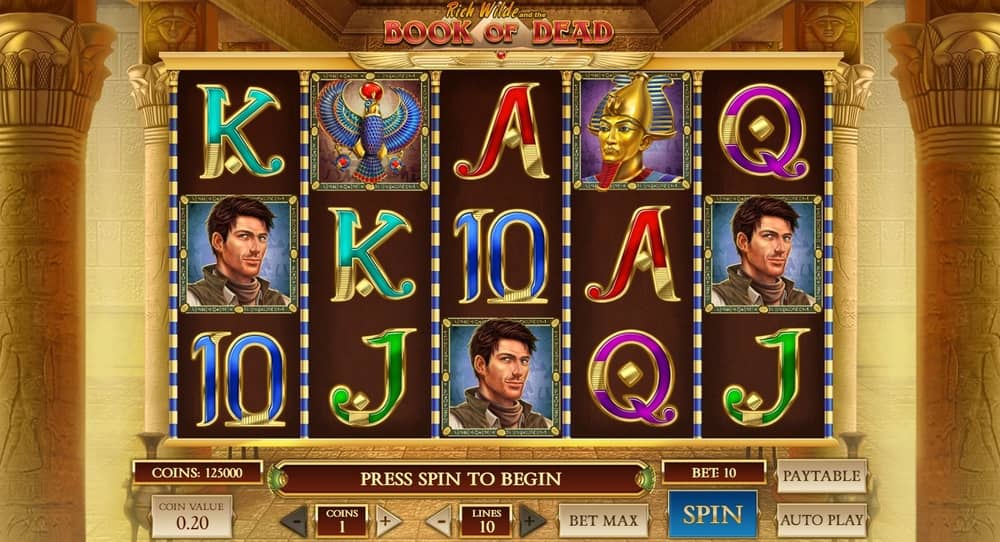 You can play the Book of Dead slot anywhere from $0,01 per spin up to $50 per spin. The reason why you can already play the game from a single cent per spin is that you can set the coin value at 0.01, the number of coins at 1, and just play 1 pay line per spin.

This isn’t very exciting, but it shows how flexible the game is in regard to betting settings.

You can basically adjust every type of your bet to wager exactly how you want. This is one thing that makes Book of Dead such a popular slot. Note that some real money online casinos offer players the possibility to play the game for up to $100 or even $200 per spin.

Book of Dead RTP and Volatility

The return to player of Book of Dead is 96,21%, which is a bit higher than the industry average of 96% among online slot machines.

The game's volatility is extremely high, which means that you won’t win often, but when you win, you win big.

This is something to keep in mind when setting your wager per spin, as you might need quite a few spins to hit that bonus round or big multiplier. The maximum amount you can win with Book of Dead is 5,000x your stake per spin.

Book of Dead Bonuses and Features

Because the whole game involves the Book of Dead, this is the symbol you want to hit. It acts as both a scatter, and a wild and can trigger free spins. Below we will explain to you exactly how this all works.

Whenever you spin 3 or more Book of Dead symbols, you will receive 10 free spins. The Book of Dead is also the game's wild symbol, meaning that it can substitute all other symbols to create winning combinations. 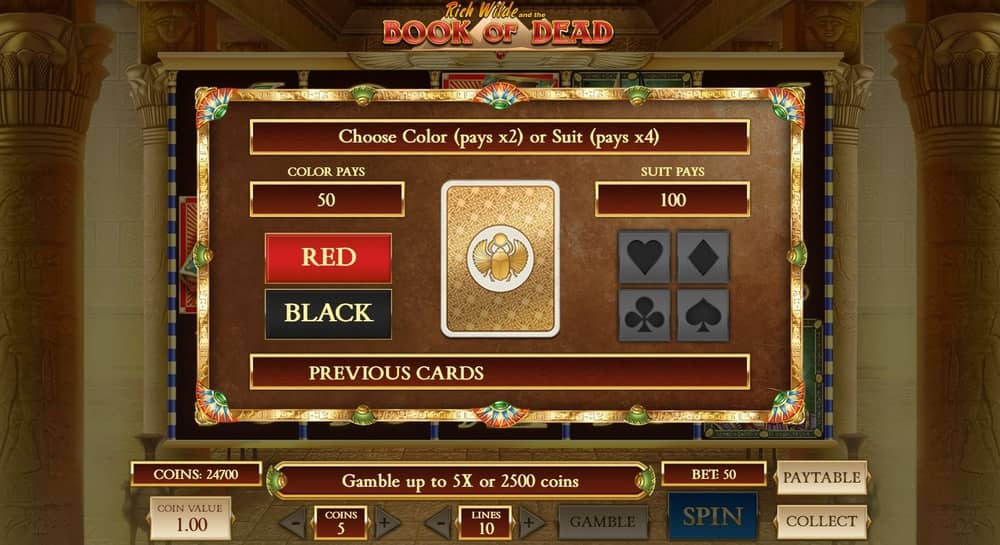 Every time you spin a winning combination, you have the time to either collect your winnings or gamble.

When you gamble, a card will be dealt face down. You have to predict whether the card is red or black or which suit it is.

How to Win with Book of Dead by Play’n Go 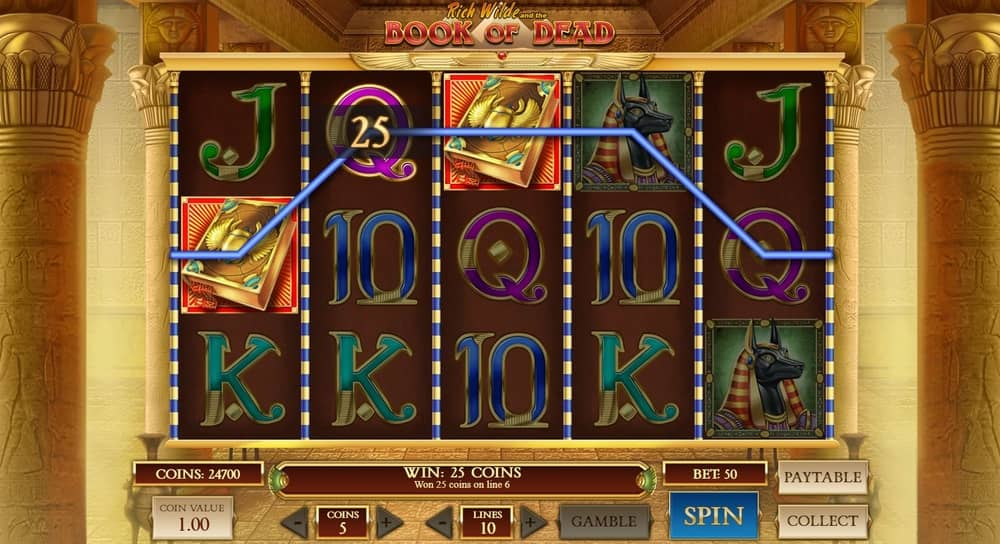 The maximum amount of money you can win with the Book of Dead slot is 5000x your stake per spin.

Play the Book of Dead Slot for Free

This allows you to familiarize yourself with the game, its payouts, volatility, and bonus features. Almost every online casino that has Play’n Go slots in its game library gives players access to the Book of Dead demo version, where you get a $25k virtual balance to play the game with.

Although you cannot win any real money by playing Book of Dead for free, it might pay off in the end because it allows you to determine your wager per spin better when playing the game for real money.

Book of Dead by Play’n Go Slot on Mobile Devices 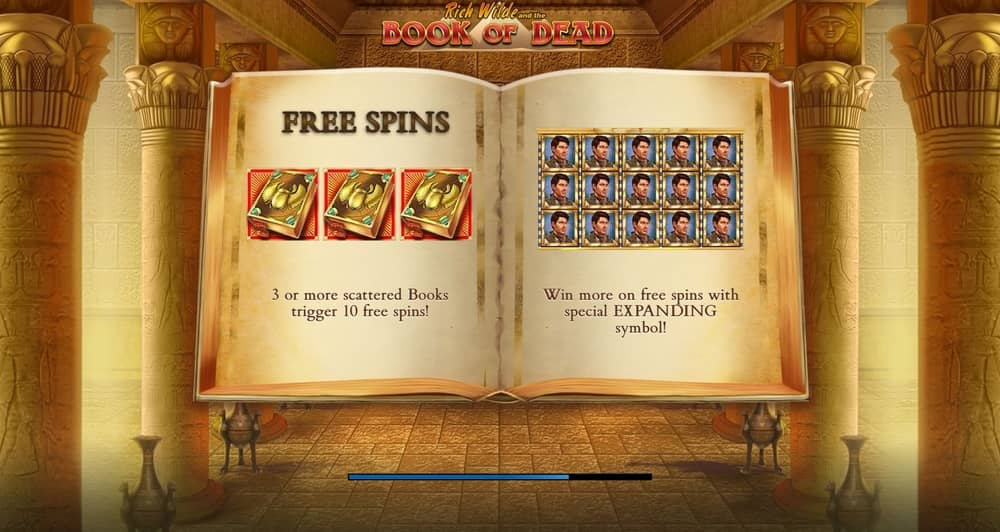 Book of Dead is a great slot machine game to play on mobile devices like smartphones and tablets. It is coded in HTML 5, which makes the game responsive. This means that all the texts and buttons will automatically adjust to the screen size of your device. Instead of clicking all the buttons, you can just tap on your touchscreen instead.

One of the big advantages of playing Book of Dead on smartphones is that it is optimized for portrait mode, which we can’t say about every other online slot machine game.

Book of Ra by Novomatic

Although it is a different game, Book of Dead by Play’n Go is sort of inspired by Book of Ra by Novomatic. It features almost the exact same symbols, mechanics, and an adventurous Indiana Jones-looking lead character. If your favorite online casino doesn’t have Play’n Go slots in its game library, you might want to look for Book of Ra by Novomatic instead.

Play’n Go is a Swedish casino software provider founded in 2005. They managed to grow to one of the largest gaming entertainment suppliers with just a small team.

The company has about 600 employees and offices in Malta and the United Kingdom. Some of their most popular online slots are Moon Princess, Fat Frankies, and Reactoonz 2.

Book of Dead by Play’n Go – Our Verdict

Book of Dead has been one of the most popular casino games for over a decade now. The ancient Egypt theme has a certain mystery around it, and the game is unmatched in its genre, although Hand of Anubis from Hacksaw Gaming comes close.

With its Book of Dead acting as both wild and scatter symbol, retriggering free spins, and a gamble feature, Rich Wilde’s Book of Dead is just an incredibly well-designed game.

It will probably be topping the charts of most popular ancient Egypt-themed slots for quite a while.

If you’re into Ancient Egypt slots, you should definitely play Book of Dead sometime, even if it’s just to check out why almost every slot player is raving about it.

However, if you like to try table games like roulette or blackjack, we also have you covered.

Can I Play Book of Dead for free?

Does Book of Dead have a bonus game?

Yes, whenever you spin 3 or more Books of Dead scatter symbols, you will trigger 10 free spins and a randomly chosen expanding wild symbol.

Is Book of Dead a slot with high volatility?

Yes, Book of Dead is an online slot machine game with extremely high volatility. We suggest taking this into account when deciding your wager per spin.

Where do I play Book of Dead?

You play Book of Dead at any online casino that features games by the casino software provider Play’n Go. If your favorite casino doesn’t have these games, you can search for Book of Ra by Novomatic instead, a similar game with almost the same mechanics.

You don’t need to download the Book of Dead slot machine game at all. You can just play it directly in your browser at your favorite online casino. 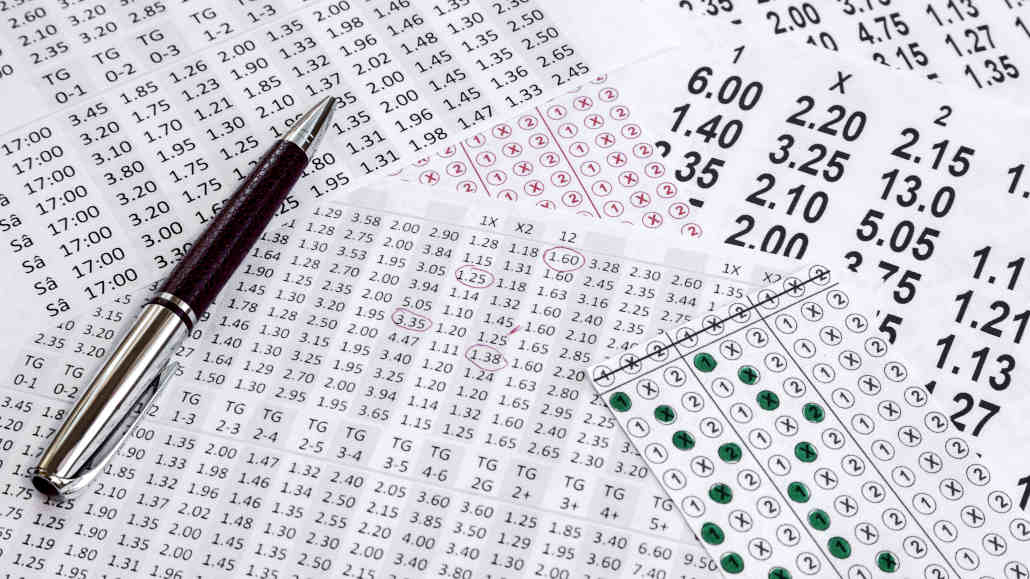 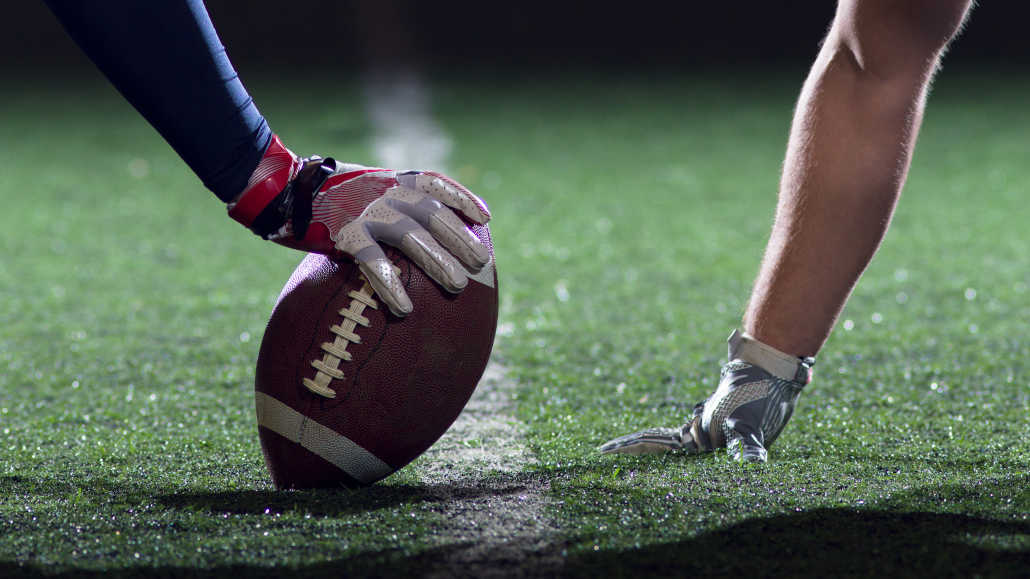 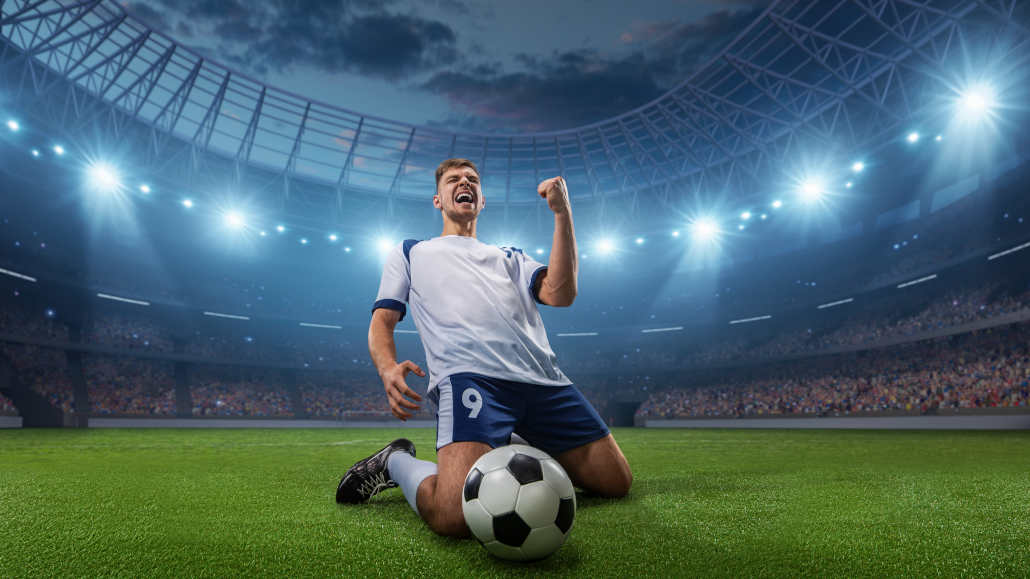 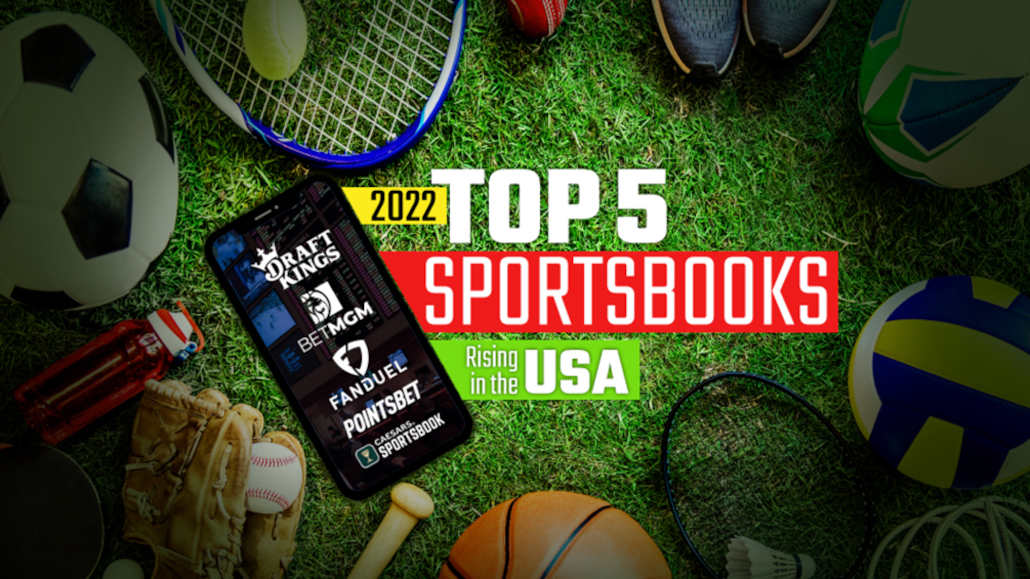 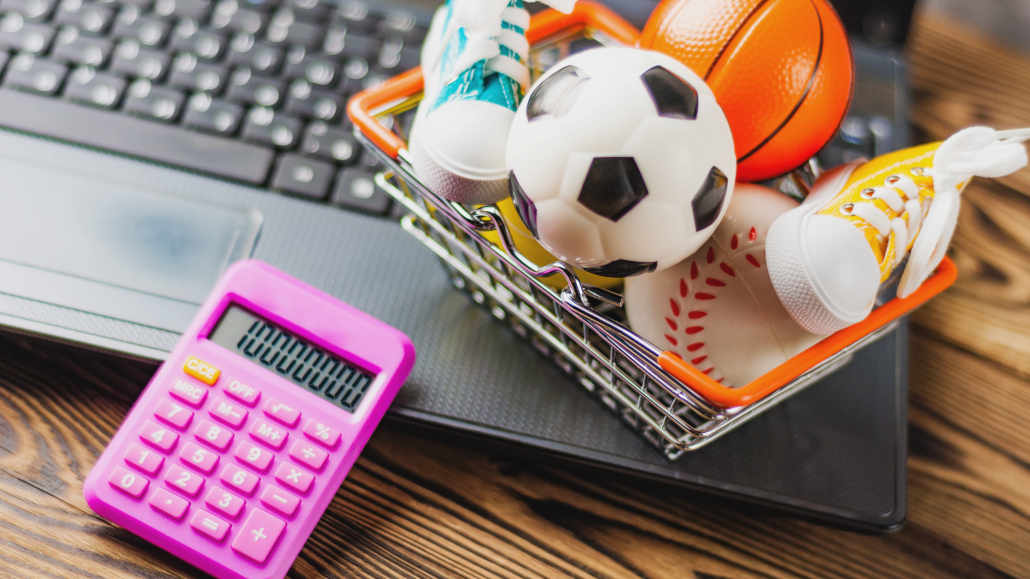 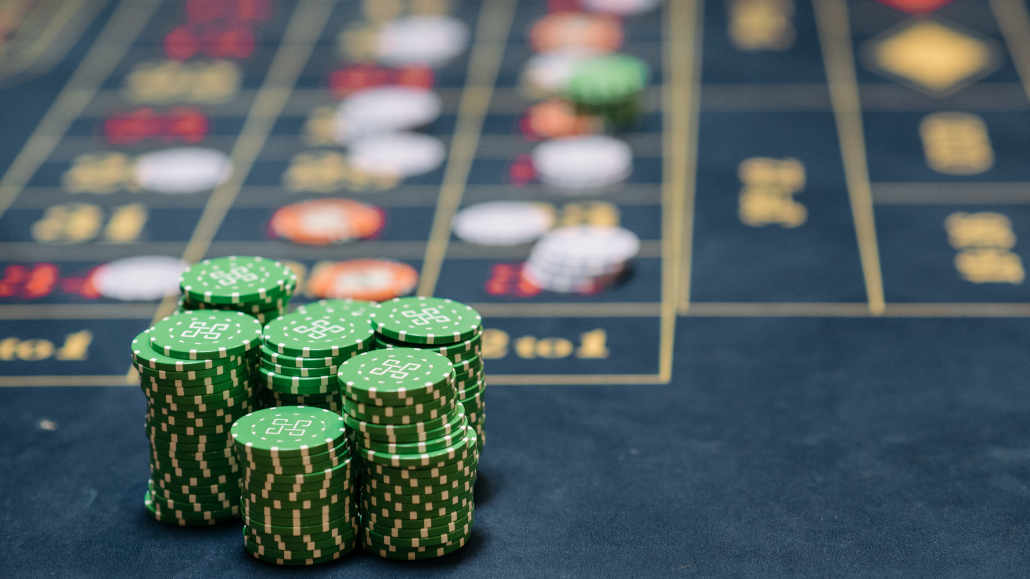