Slow Roll in Poker: Why And How To Avoid This Deadly Sin 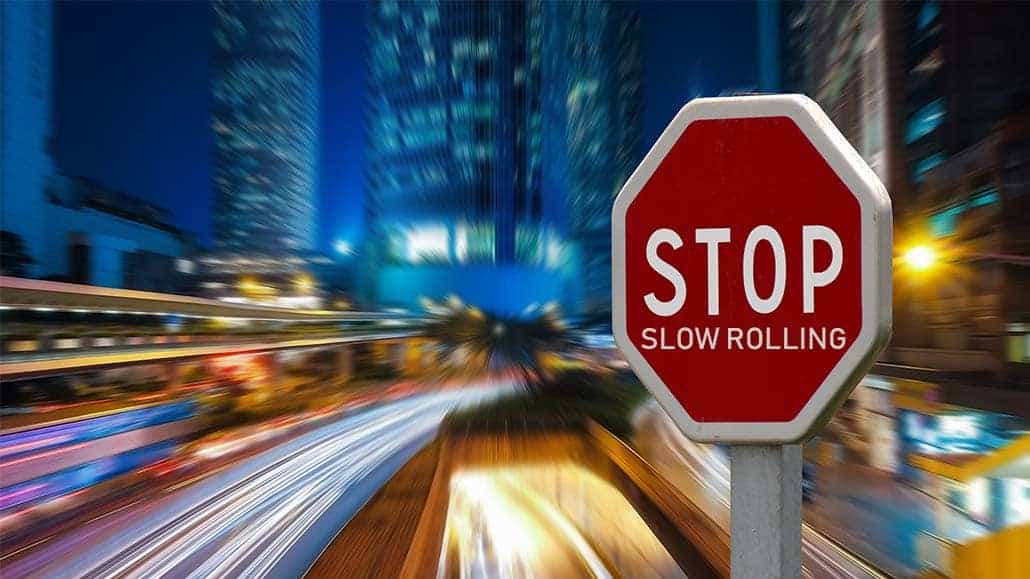 Over the years, I’ve played thousands of poker hands. Some of them were very important as they brought me a big stack advantage in the final stages of the tournament or won me huge pots in cash games.

Yet, I will never forget the first time I faced a slow roll in poker, even though the pot was relatively small.

It was in a $1/$2 cash game, about two hours into the session. I was sitting with about $350 in front of me and got involved in a big hand against a player who had me covered.

After floating the flop and semi-bluff raising the turn when I picked up the flush draw, I rivered the Ace-high flush on Jd 9h 2c 7h 5h.

I took a few seconds before announcing all-in, and my opponent went into a deep tank. Eventually, after about four or five minutes, he said, “okay, I call,” and I proudly turned my flush.

Instead of mucking his cards, though, he held onto them. After about 30 seconds of him staring at the board and not releasing his hand, I realized that he could have the only combination that can beat me, 8h6h for the straight-flush.

“You have it, don’t you?” – I asked after another thirty seconds have passed.

At this point, he started to laugh and finally turned his hand over. Sure enough, he had it. The straight flush, the ultimate nuts combined with the ultimate slow roll poker move.

The amount of money I lost in that hand wasn’t particularly important even at that early stage of my poker career, but because of the slow roll, I remember that hand to this very day.

What Is Slow Rolling in Poker?

Although this article could probably do without the lengthy introduction, I wanted to put it out there for you to get the picture if you’re new to poker. Slow rolling is one of the worst moves you can do at the table, especially when you take things to the extreme like in the above example.

Let us define a slow roll poker move – it is when you take a long time to make the call or table your cards when you clearly have the winning hand.

Sometimes, you’ll know for sure you are winning as your opponent has already turned their hand. Sometimes, they’ll move all in, and you’re sitting there with immortal nuts, so again, you know you’re ahead.

The nice thing to do here is to call quickly, show the winning hand, and move on to the next one. There is no need to add insult to injury or give false hopes to the person sitting across from you.

Doing this won’t make you any friends and doesn’t achieve much, even though some seem to believe otherwise.

WHY SHOULD YOU AVOID SLOW ROLL IN POKER?

You may think that playing slow roll poker can somehow give you an advantage over your opponents. After all, this kind of move may put someone on tilt and make them play bad for the rest of the session. So, from that perspective, it seems to make some sense.

However, this is something that has to do with unwritten poker etiquette. Many things could put people on tilt, like spilling a drink in their lap or “accidentally” knocking over their chips. None of these are strictly against the poker rules.

But you don’t do it because you know you shouldn’t.

But it’s common courtesy to do it as fast as you can. Of course, you’re allowed to double-check your hand to make sure you have what you think you have, and you don’t have to rush things too much, but you don’t need to slow roll, either.

BUT, SLOW ROLLING IS FUNNY!

It can be until it happens to you, or it leads to someone rage-quitting the game or making a big scene. Now, will they be over the line at that point? Probably, but you kind of asked for it if you pulled a big slow roll on someone.

Keep in mind that poker is a game played by human beings, and it involves a lot of emotions. When you pull a slow roll poker move in a huge pot, you can’t expect everyone to take it in strides. Some people will explode and that’s bad for you, it’s bad for the game, and you don’t gain anything by doing it

Plus, if you’re slow-rolling people left and right, you can expect this to start happening to you. Most players hate slow rollers and will do whatever they can to give them a taste of their own medicine. At this point, you may start realizing that it’s not as funny as you thought it was.

WHAT GOES AROUND, COMES AROUND

If you’re a regular in a poker game that gathers the same group of people, it won’t take a long time for you to be marked as the slow roller.

When this happens, you can fully expect from pretty much everyone in the game to consciously look for opportunities to slow roll you.

Now, imagine a game where eight other players are all trying to pull a slow roll on you. Time and time again, they wait until the very last moment to table their cards and scoop the pot you thought was yours.

You may think it’s cool if no one likes you, and they try to playback at you as you can turn it to your advantage. There is even some truth to it.

However, you should be able to at least create that atmosphere by doing things by the book and not breaking one of the oldest rules of poker etiquette – you don’t slow roll people in poker.

Of course, you can be a fair player that respects the others and still find yourself in a game with someone who lowes slow rolling. And, you will likely fall victim to their shenanigans at some point during the session as these people seem to enjoy it.

You can’t avoid getting slow rolled, but I’d say you must do your best not to let it get under your skin.

If you’re the first to show, show your hand and wait patiently for them to do what they’re supposed to do.

If they start humming and hamming, you probably know they’re slow rolling you, so be mentally prepared to lose the pot.

However, if you’re not the first to show, never turn your cards up first against these people. Don’t do it even if you have the nuts. Wait for them to show their hand or muck their cards.

While I believe it’s a nice thing to do to table the nuts against most players, slow rollers don’t deserve this courtesy, especially in Texas Holdem poker games. Force them to show or muck even if you don’t particularly care what they have.

In this situation, you’re not the one doing the slow roll as they are supposed to table their hand. It is completely fine regardless of who you’re up against but it is particularly fine against those who find it funny to take several minutes to table the winner and drag the pot.

These players don’t just annoy the person they slow roll, but also the rest of the table as they’re holding up the game and wasting everyone's time.

ACCIDENTAL SLOW ROLL POKER MOVES AND HOW TO AVOID IT

Every now and then, you might find yourself on the wrong side of an accidental slow roll, or you might pull the one yourself. It happens and it’s not a huge deal as long as what happens after is handled properly.

For example, a river could bring the fourth spade on a dicey board, and you and your opponent both check after some heavy action on the flop and the turn. You tap the table and say, “you got it,” and they turn over a flopped set. As you are about to muck your cards, you realize your kicker is a spade.

Of course, you won’t just give them the pot at this point. However,  the proper etiquette, in this case, is to apologize, turn over your hand, and win the pot.

Tell them that you didn’t realize you had a spade in your hand, and most players will be fine with this, even if slightly annoyed.

When you find yourself on the other side of this situation, be prepared to take it in strides. If the player you’re up against is generally fair and nice, it’s not likely they tried to pull a slow roll poker move on you on purpose. Don’t take it to heart, accept their apology, and move on.

That being said, it is quite easy to avoid an accidental slow roll:

These are very simple steps you can always take when playing to limit any chance of accidental slow roll.

As already mentioned, the only time when it might be fine to slow roll someone on purpose is when they are a player who enjoys doing it to others. In this scenario, you’re within your right to give them a taste of their own medicine.

Whether you do it or not is entirely up to you. I suggest taking a high road in these situations still as tabling the winner and dragging the pot before they know what hit them is probably going to throw them off even more.

But, as explained, you don’t need to be particularly nice to them, either, at least in terms of poker. Let them always show their hand when they are the first to do it.

CONCLUSION: THERE IS NO EXCUSE FOR SLOW ROLLING IN POKER

Now that you know what is slow rolling and why it is bad etiquette, you have no excuse ever to pull a slow roll poker move on anyone. You might be annoyed by the way someone plays or they might be outplaying you all the time. It’s not fun for sure.

But, you don’t respond to it by slow rolling them.

If someone is outplaying you, study to get better and surprise them that way. There are plenty of great poker tips and software that can help you.

If someone is taking forever to act, you’re only stealing more precious time by pulling a slow roll. And, if you’re trying to put someone on tilt by doing this, ask yourself, is this really the kind of player you want to be?

There are so many legit poker strategies and moves you can learn to beat the game that you should never resort to unethical plays such as slow-rolling your opponents.

Being a fair player and treating your opponents with respect will give you more benefits in the long run than any short term advantage you gain by slow running.