Worst Hand in Poker – Should You Ever Play 2-7 Offsuit In Texas Holdem? 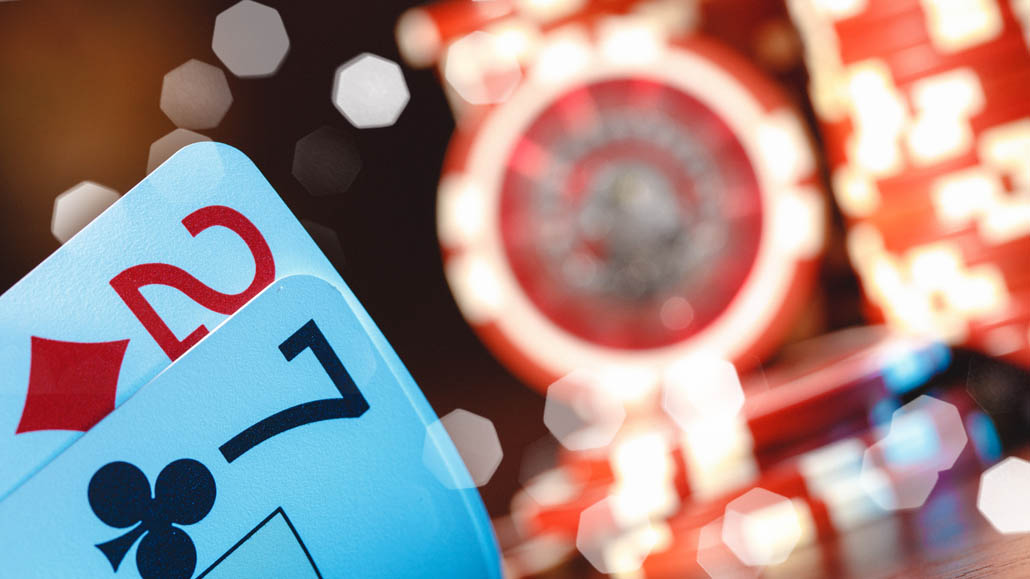 Worst Hand in Poker – Should You Ever Play 2-7 Offsuit In Texas Holdem?

Texas Hold’em is a very complex game when you consider all its variables. Most players don’t really do that, though, and keep playing at a very basic level for most of their lives.

That said, whether you are a seasoned pro or an amateur recreational player, you surely know what the best and worst starting hands in poker are.

Despite this, there is a lot of superstition and misconception going on even in this department.

I have personally seen people fold pocket aces pre-flop in poker games because of “bad luck,” and I have seen people make huge moves with trash hands.

Whatever you may choose to believe, every poker hand ranks somewhere on the chart between the best and the worst.

While a pair of aces is the best possible hand you can pick up, 2-7 offsuit is officially the worst hand in poker.

In this article, I will look into why 2-7 offsuit is the worst hand in poker, what makes it so bad, and why you should almost never play it.

I will also mention the few instances in which it makes sense to play this hand, and I will compare it to several other hands that rank very badly as well.

Why is 2-7 Offsuit the Worst Hand in Poker?

It is quite easy to see what makes pocket aces the best poker hand. After all, the ace is the highest-ranked card in the deck, and pairs are hard to get. This makes AA the easy choice for the best hand, even to a layman. 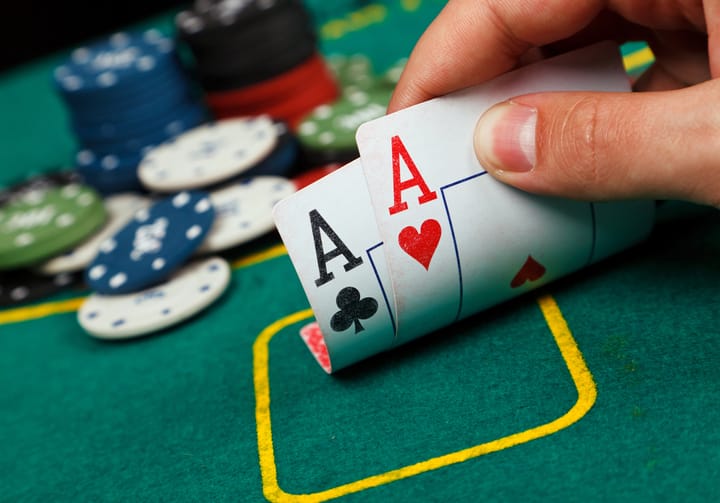 However, poker players actually think in terms of equity, and the real reason we know pocket aces are the best starting hand is that they have so much equity against all other hands.

Against a pair of kings, aces have over 80% equity, and they are a massive 87.2% favorite against 2-7 offsuit.

The same logic applies to determining what makes 2-7 offsuit the worst poker hand.

However, most players will never play 2-3 either, which means you will never find yourself in this advantageous situation.

On the other hand, if you were to play 2-3 or 2-4, you could end up making a straight and winning a big pot against a big pocket pair or a set.

Not only does 2-7 rank badly in terms of sheer equity, but it also lacks any positive implications. You can’t make a straight, you can’t make a flush, and any two pair you make with it will never be very good on almost any board.

Even when you make trips with 2-7 offsuit, you will often end up getting outkicked by another player with the same trips if any significant amount of chips gets into the pot.

There is a very good reason top poker players avoid playing hands like this altogether. It's definitely not because they are afraid to gamble. It's simply because it's not gambling if you are giving the other player a massive edge over you to start with.

2-7 Offsuit in Heads Up Poker

Heads-up poker is a completely different beast to regular six-max poker. Depending on your opponent and the raise size you are using, you can often raise nearly all hands when you are going first on the button.

However, even the loosest and most aggressive pro players will still not open pots with 2-7 offsuit and several other hands at the bottom of the chart.

The loosest raising range on the button in heads up Texas Hold'em should be around 91% of the hands. You would be raising close to 100% of the hands if you also opened 2-7 offsuit. The one thing  I will mention that if you were going to open a hand in the bottom portion of the range, 2-7 would probably be a better raising candidate than 2-3 offsuit. This is simply because it does better against hands like 5-6 suited or 3-4 suited, which players will be defending in heads-up pots.

Nevertheless, the best way to go around playing your 2-7 offsuit is to always fold it, no matter what. This is the worst hand in Texas Hold'em and the first one you should be letting go of.

I have answered the question, “why is 7-2 the worst hand in poker,” but I have not yet discussed one very common phenomenon in modern-day poker. Of course, I’m talking about the 2-7 game.

When playing Texas Hold'em cash games, players often like to spice up the action. There is no better way to do that than giving everyone at the table a good reason to play the worst hand in poker.

The 2-7 game is pretty simple! If you can win a hand holding 2-7 in the hole, in any way, you will win a bounty from every player at the table.

Often, the bounty will be worth five big blinds per player.

The 2-7 game adds a whole new dynamic to the game. If a player is making a big raise pre-flop, everyone has to wonder if they have a great hand or the worst poker hand. This leads to some big pots and players winning big by just taking down the blinds with these cards.

If you want to take your home game to the next level, I would highly recommend introducing the 2-7 game. If you do, remember to still be careful with this hand and don't go too far with it. Otherwise, you may end up losing huge pots for no good reason.

Other Starting Hands to Avoid

2-7 offsuit is by far the worst poker hand, but it certainly isn’t the only hand you should always look to fold. In fact, if you are playing in a ring game, there are quite a few bad poker hands you should practically always get away from.

There can be a lot of temptation to play certain hands if you are constantly getting dealt bad cards. But this is a temptation you must resist if you want to have the best chance of coming out a winner. 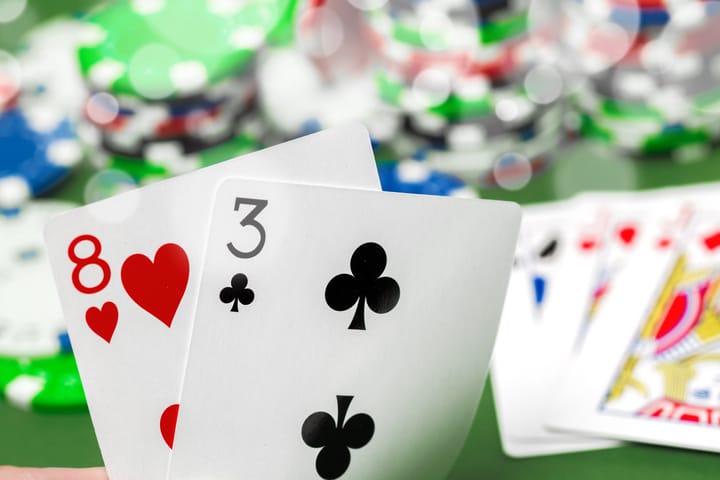 I will talk about a few bad poker hands that players sometimes play but should almost always fold. I will also mention a hand or two that may be playable at times but are often best folded before any action.

This hand was made famous by WSOP champion and poker legend Doyle Brunson, who won back-to-back WSOP Main Events holding these cards back in a day.

The thing to remember is that these were cards he held in a heads up. At the time, both he and his opponent were short on chips. It's a completely different situation to your common freezeout tournament or ring game spot.

T-2 offsuit ranks nearly as badly as 7-2 offsuit, and it is one of the worst hands in poker.

There is absolutely no reason to limp, raise, or call a raise holding these two cards.

If you get dealt T-2 in your game, think of the poker legend and his legacy, smile to yourself, and then throw the cards into the muck. Don't worry about the occasional full house you would have made with it by the river. Any two cards can make a full house.

There are two main differences between 7-2 and 6-2. The first one has a slightly higher kicker, while the latter can make a straight with three cards.

The one thing they share is that they are both absolute trash hands. There is seldom any good reason to play either one of them.

Like 7-2, 6-2 offsuit is a hand that should even be folded when you have the button in a heads-up match. You should certainly fold it in all other situations. 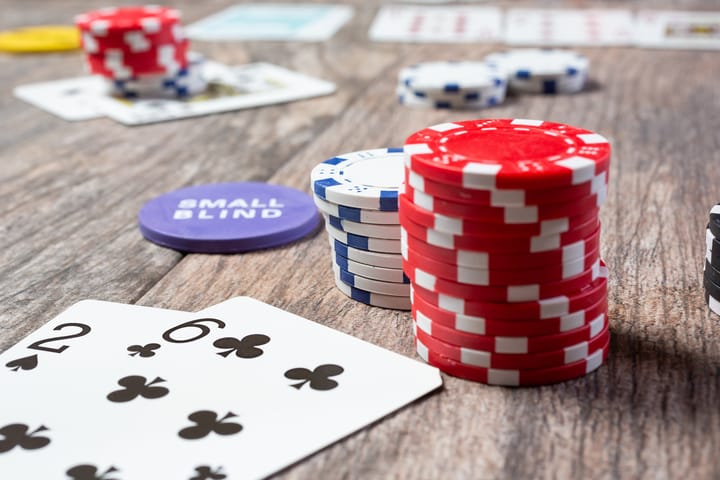 The only time you can play this hand is when you are the big blind and are able to check behind, or possibly in the small blind if many players limp in front of you. Even in this poker position, you might consider letting the cards go so you don’t get into any trouble.

There are some hands, such as J-4 offsuit, that simply don't make any sense to play, despite having one reasonable card.

A hand like J-4 offsuit or Q-3 offsuit will rarely win you a big pot. At the same time, they will often get you into some trouble when you make a top pair only to be outkicked by an opponent.

The big difference is that these bad poker hands become playable in heads-up pots with only one opponent still active. You can open these hands from the button in a heads-up game but could also opt to fold them if you are playing a more conservative strategy.

7-3 offsuit is a hand that looks very much like 7-2 offsuit but is still just slightly better than the worst hand in poker.

The main advantage of this hand compared to 7-2 is that it can make a straight with just three cards.

Still, this isn’t really much of a reason to play it.

Making a straight is very difficult, to begin with. Even when you do, there is some chance you will lose to 7-8 or flushes and full houses on various boards.

The best thing to do when you get dealt 7-3 offsuit is simply chuck it into the muck and wait for a better situation. Given this is one of the worst poker hands, it is almost certain to come the very next round.

Without any question, 7-2 offsuit is the worst starting hand in poker. It is the number one candidate for an open fold in every position and every situation.

If you get dealt this trash hand, simply fold it every time, and you will never make a mistake. If you do ever decide to play it, make sure you are aggressive and try to win the pot as early as possible. 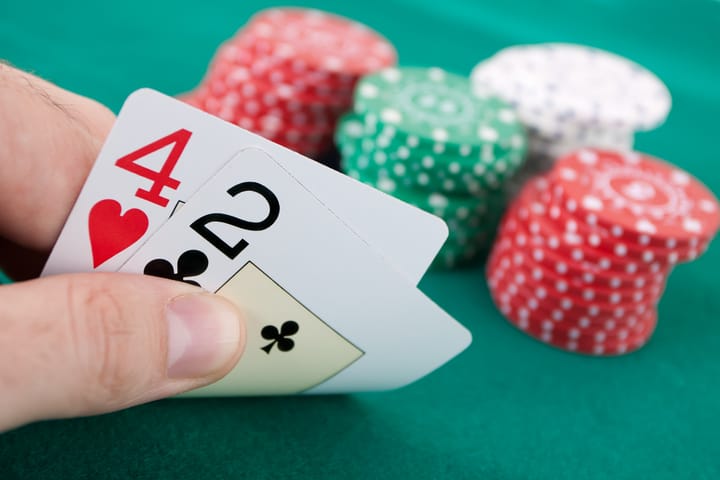 The terrible equity that 7-2 and other similar hands have against the entire range of poker hands means you will rarely be holding the winner by the time the river is dealt.

If you want to get some crazy poker action going, consider introducing the 7-2 game into your cash game. However, don’t be too surprised to see a lot of frustration if you try running people over with this weak holding. This is taking variance to a whole new level! 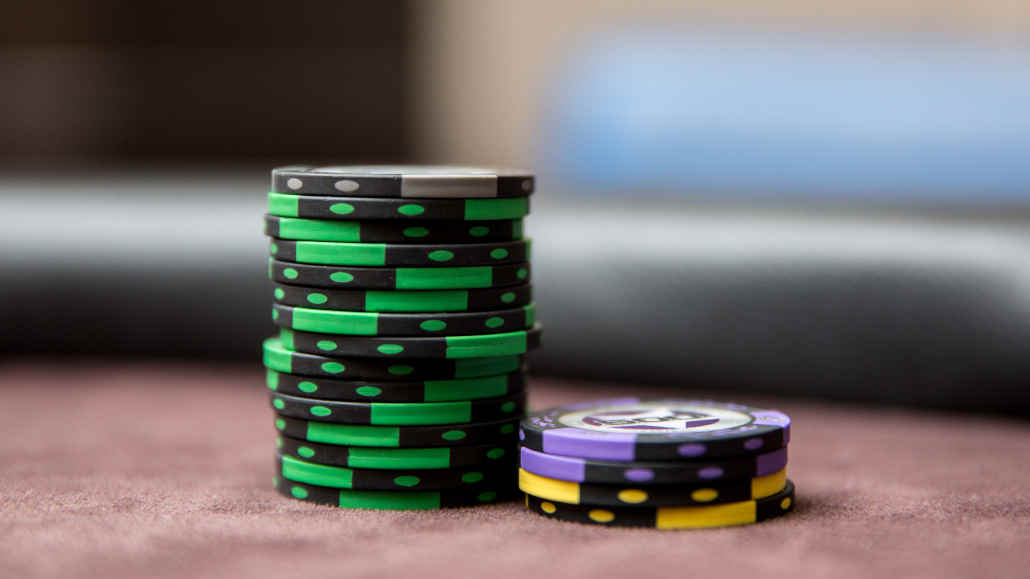 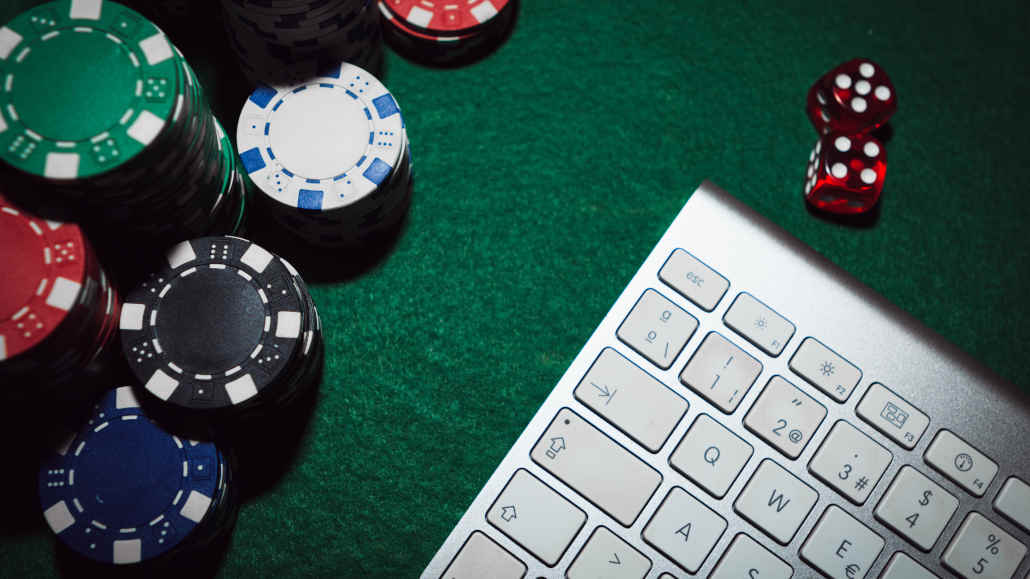 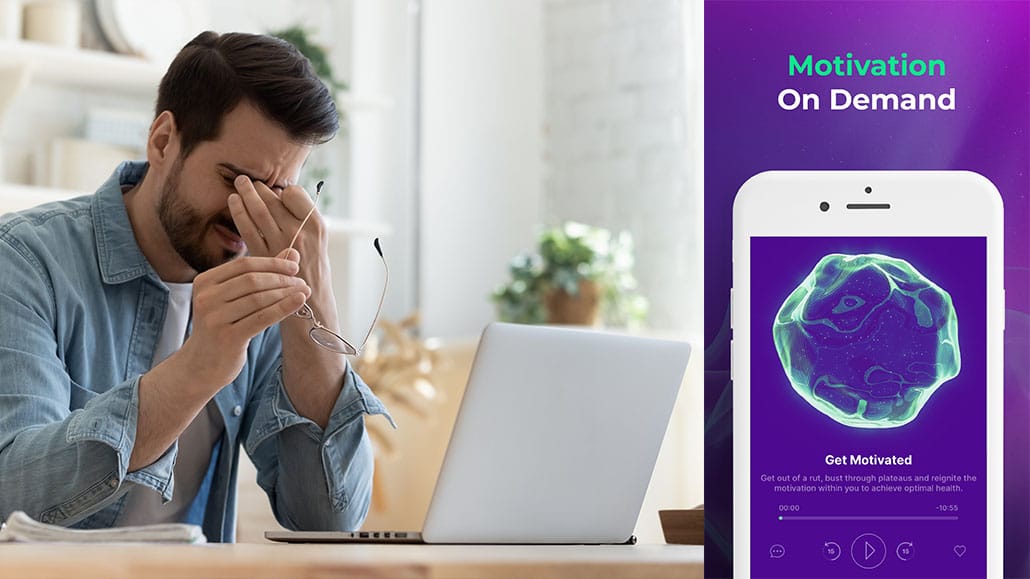