How to Play Ace King to Optimize Your Poker Winnings 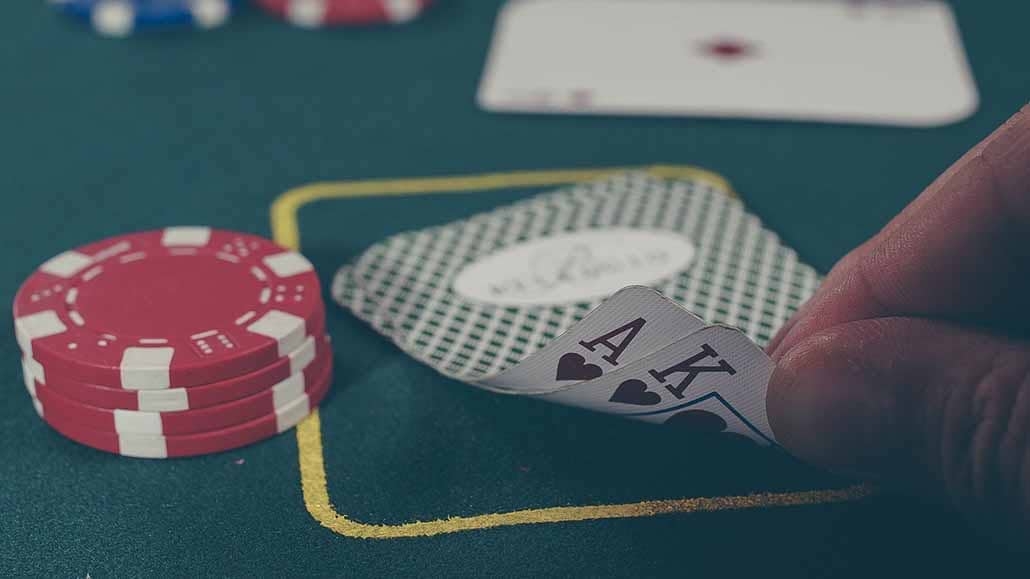 If you’ve been around poker for a while, you’ve probably heard countless stories of how someone lost it all with Ace-King, and that is by far not one of the best poker hands as many thinks.

Many inexperienced players believe that the big slick poker hand brings a lot of problems and is hyped up for no reason, but that mostly comes from playing it poorly.

Once you know how to play Ace King correctly, depending on the situation, you’ll realize just how powerful this hand is.

If you want to maximize your winnings and optimize your strategy with Ace King, you should understand all the factors that come into play when deciding on your next move.

In this article, I’ll try to explain all these different aspects of the big slick poker strategy and show you the hidden power behind it.

How to Play Ace King Before the Flop

Some players call AK a drawing hand, and that is true to some extent since you do not yet have a pair strictly speaking. However, this is by far the best drawing hand you can get before the flop in Texas Hold’em, especially Ace King suited.

This hand has so much potential that you can play it super-aggressively in almost all usual spots, especially in tournaments.

First of all, the probability of an Ace or a King hitting the flop when you have AK is just around 29%. So, even when you start behind (i.e., against a pocket pair), you’ll out-flop them about 30% of the time, making the best hand.

Of course, this isn’t accounting for the times when they actually have a weaker ace or a hand like KQ, etc., where you’re ahead the entire time; or for those instances where they’ll have to give up to your continuation bet after two or three overcards to their pocket pair come on the flop.

Putting Pedal to the Metal

When you consider all these facts, it is easy to understand why you want to play your AK poker hands aggressively.

The chances of winning before the flop (by pure aggression) combined with chances of out-flopping or simply bluffing out your opponent give you all the power you need.

In most scenarios where you’re dealt King and Ace, you’ll want to be the one driving the action. What I mean is:

I could go at length here to try and justify this approach, but the simple fact of the matter is that AK offsuit or suited, is a powerful hand before the flop and will be ahead of most your opponents’ ranges. 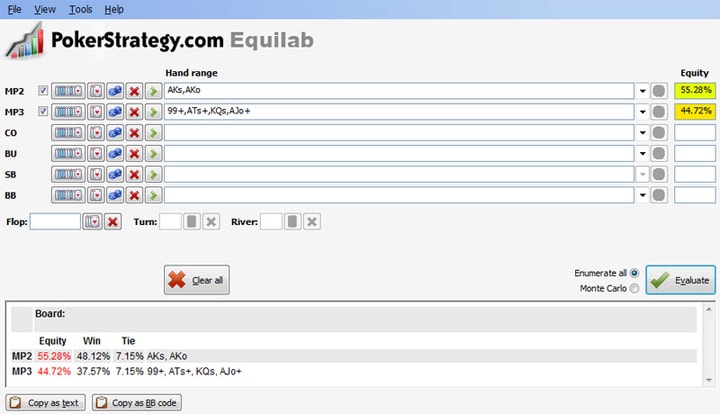 As you can see from the picture, Ace King is a slight favorite against a very strong range that contains pocket pairs of Nines or better, AJo+, ATs+, and KQs.

Unless you’re playing an absolute nit, this is the kind of range that most players will use to construct their 3-bets, and it doesn’t even include any bluffs.

When you consider that people will occasionally bluff and that they will raise and 3-bet with much wider ranges than this, it becomes even more apparent why you want to get as many chips in the middle before the flop as you possibly can.

By driving action preflop, you’re making the hand easier to play later as your stack to pot ratio becomes smaller. Some players hate this approach as they see it as playing “bingo poker,” but there is nothing bingo-y about it.

You want to get as many chips in the middle when you can safely assume you are a decent favorite. It’s just sound poker.

At this point, you may be thinking that this is a matter of preference or play style and that you can, if you so wish, play AK passively and still make decent profits. Once again, this is flawed logic, as playing big slick passively will often lead to a world of pain.

There are a few main reasons why you want to be aggressive before the flop:

The first reason I’ve already discussed so I won’t go into it again. You simply want to build that pot up while you are reasonably certain to be a mathematical favorite. Once the flop comes 5 9 10, you can no longer be sure of that assumption.

Driving the action will help you better define the ranges of your opponents. While some players may be more liberal with their preflop hand selection, not many of them will be thrilled to put 20%+ of their stack in the middle with 53s.

So, staying aggressive helps you define the strength of their holdings and define their range, at least to some extent.

Finally, King Ace plays best in heads up pots, i.e., against a single opponent. I will talk about how to play Big Slick in multi-way pots a bit later, but you want to get heads up if possible since it will help you win more pots even when you miss the flop.

Now, if you adopt the passive approach, all of these points go out of the window, and your hand loses most of its value

The funny thing is, if you actually let everyone see the cheap flop when you have AK and then proceed to stack off with a top pair, top kicker, then it is you who’s making a mistake.

This isn’t the kind of hand that you can use to “trap” other players unless you have a short stack and are looking to limp-shove over someone’s preflop raise.

AK and Stack Depth: You Don’t Have to Stack Off All The Time

Everything I talked about thus far pertains to standard situations, i.e., tournaments where you’ll usually have fewer than 100 big blinds and cash games where your stack is around 100 bigs. However, as you get deeper, AK starts to lose some of its power.

Big Slick is probably too strong of a hand to just fold here, but you don’t have to go crazy with it, either. In fact, you’ll regularly see seasoned pros flat call here and play their hand in position.

Of course, there are still some other factors you could consider. For example, the UTG player could be a complete maniac with a huge 4-betting range. In that case, you might want to go for a big 5-bet and be ready to stack off.

But most players with a big stack in front of them won’t be in a rush to just donate their chips. In this particular spot, especially considering the fact they opened from under the gun, their range is more likely to look like this. 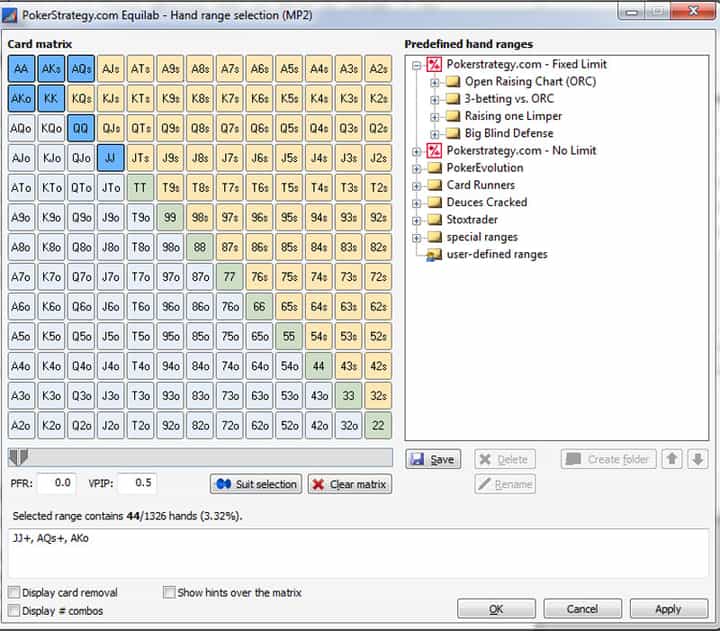 Against that range, AK offsuit has 42% equity, so you could even make an argument for folding. However, given the fact you have the position and the possibility of some bluffs still being in there, calling and taking the flop is the best approach.

Another advantage of calling is that you let your opponent keep his bluffs, and he would fold all of those hands if you choose to 5-bet.

If you’re still wondering why the stack depth plays such a significant role here, it’s quite simple. In the same situation, but with the UTG player having only $150 in front of them, they might be happy to take their chances with a pair as low as pocket 7s or a hand like ATs or even KQs.

But with 500 big blinds to start the hand, most players who know what they’re doing won’t have these hands in their 4-betting range, and even more so will not continue if you choose to 5-bet.

It is after the flop that things can get tricky with King Ace. Before the flop, you can be fairly certain to have the statistically best hand. However, once that flop peels off, all options are back on the table once again.

To be able to play big slick poker properly after the flop, you need to follow the advice for the preflop play. I’ve already explained why this is important as you want to achieve specific goals to make it easier for you to continue in hand.

There are two main scenarios I will consider here. The first and the more favorable one is where you get all opponents’ but one to fold and get to play heads up. The second scenario deals with multi-way pots, which can be quite tricky.

Ace King in Heads Up Pots

The main reason why you want to get heads up when playing big slick is that it opens many possibilities to win a hand even when you miss.

As a general rule of thumb, you’ll want to fire a continuation bet most of the time when you miss. For example, say you raise and the big blind calls. The flop comes Q73 rainbow, and they check to you.

You’ll definitely want to c-bet and continue your preflop aggression. These board textures won’t connect too well with the overall defending range of the big blind, and even if they call on the flop, you’ll still have plenty of opportunities to improve on the turn and/or river.

Board textures you’ll want to avoid c-betting are coordinated ones containing two or three middling cards.

For example, if the board comes 10 9 7 with two hearts (and you don’t have Ace King suited in hearts, of course), you should look to check back when checked to you.

Betting on the flop will open the action and give the defending player a chance to blow you off the hand with a decent combo draw, and they’ll have a lot of these on such types of textures.

In the spots where you do connect, i.e., flop a top pair or better, you can mix things up. Checking back on super dry boards containing an Ace or a King may be kind of transparent, but it will work against weaker players.

You can sometimes afford to let them catch up a bit so that you can get in a value bet on the turn or the river.

Ideally, you want to play your AK poker hands against one opponent, but things don’t always work out as planned at the tables.

When you find yourself taking a flop against multiple opponents, your best bet is taking a cautious approach.

What I mean by this is – if you don’t connect, don’t continue barreling too often. And, as the number of players involved in the hand increases, your c-bet frequency with air should decrease.

For example, there is not much point in betting into three players when the flop comes 4 7 9. Someone will likely have a piece of some sort, and you’ll just be blowing the pot.

Against two opponents specifically, you might want to continue if you have some backdoor equity.

For example, if you have Ace King suited in spades and the flop comes with one spade and two other random cards, you can still c-bet as there is a fair number of decent turns that will allow you to continue.

If both players call and you miss the turn, though, you should abort the action and much your hand when facing any resistance.

Conclusion: How To Play Big Slick In Your Games

If you know how to play Ace King correctly, it can be one of the most powerful hands you can get in Hold’em.

Numbers don’t lie, and there is no good player out there that isn’t showing decent profits with AK over a large sample of hands.

Once you perfect your strategy, you’ll start to realize what all the hype is about and why all pros are excited to see big slick in the hole.

Hopefully, this article will help you understand how you should play King Ace to maximize your profits and what pitfalls you should avoid. If you are still not sure, you can find some poker books written on the subject and learn even more. 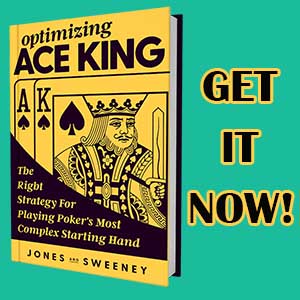