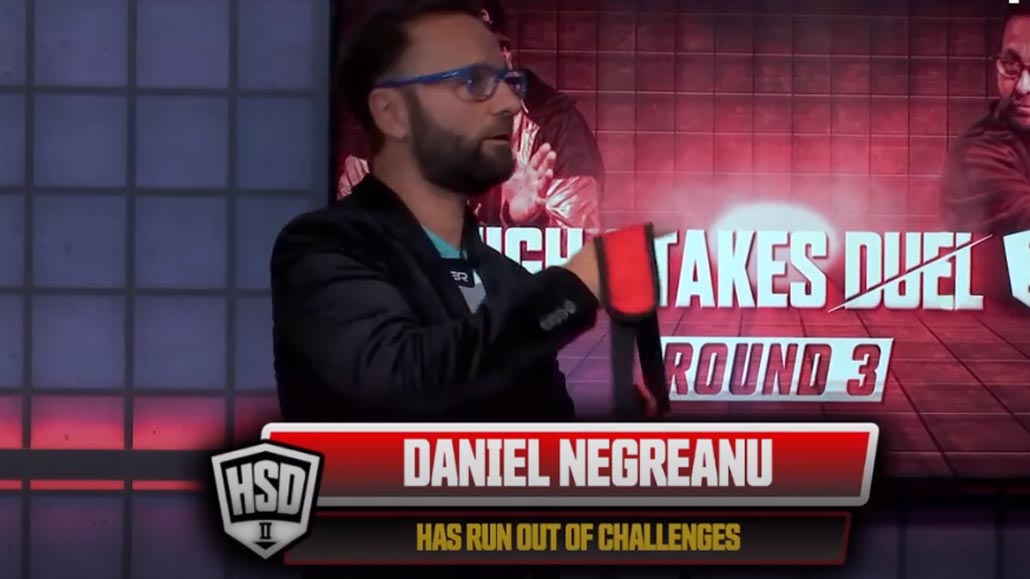 Last night saw the third and final clash between Phil Hellmuth and Daniel Negreanu. After beating the Canadian in the first two High Stakes Duels, Hellmuth came into the match filled with confidence. Negreanu, on the other hand, was looking to turn things around.

According to the High Stakes Duel rules, this would be the final game between the two, as Negreanu would no longer have the right to challenge the “Poker Brat” to a duel if he were to lose – so a lot was on the line for the Canadian.

But once again, the poker gods favored Hellmuth, who managed to come out on top after a grueling match that saw chips flying back and forth across the felt. After more than five hours of play, Phil dragged in the final pot of the night, defeating Negreanu and winning the match for the total profit of $350,000.

Although there is no lack of competition between the two, the last night’s match started in the usual cordial atmosphere, with Phil and Daniel exchanging a few compliments and a few light-hearted jokes.

Although this was Negreanu’s last shot to take Phil down from his throne, “Kid Poker” didn’t seem overly stressed or concerned. Like in the last two matches, he seemed to be in a very good mood and ready to have some fun.

Phil gave off the same vibe at the start, but as soon as a few hands didn’t go his way, he started his trademark rant, taking jabs at Daniel’s strategy and threatening to “trap him.” So, in a nutshell, he was being Phil Hellmuth we’re all used to.

But, all the chit-chat aside, both players were there to play some cards and compete for the $400,000 prize, which certainly isn’t chump change.

On top of that, Negreanu was seen as the favorite in previous matches, and betting odds were in his favor for the final skirmish as well. With all the hard work to put in during his grudge match with Doug Polk, the Canadian learned a lot about the heads-up play, and this was his time to shine.

Phil, on the other hand, has been quite dismissive of all the GTO talk and these new strategies, relying instead of his reading abilities and decades of experience on the felt – or “White Magic,” as he likes to call it.

Grueling Battle to the Last Chip

Even before the match started, it was easy to guess that no player would give up easily. This resulted in a long-winded match that took five and a half hours to complete. Over this time, we've seen several big pots, and it was a very close battle from start to finish.

For the first couple of hours, it was Negreanu dictating the pace of play, and it looked like Hellmuth was out of his depth, failing to adjust to Daniel's strategy. However, some two hours into the play, Phil caught a bit of a cooler hand that went his way to turn the tides.

Hellmuth flopped trips on a 3 3 2 board holding Qh3h and managed to get his chips in the middle against Negreanu’s pocket 9s when the turn hit a pretty innocuous 5. With this, the “Poker Brat” took a big lead of over four to one. 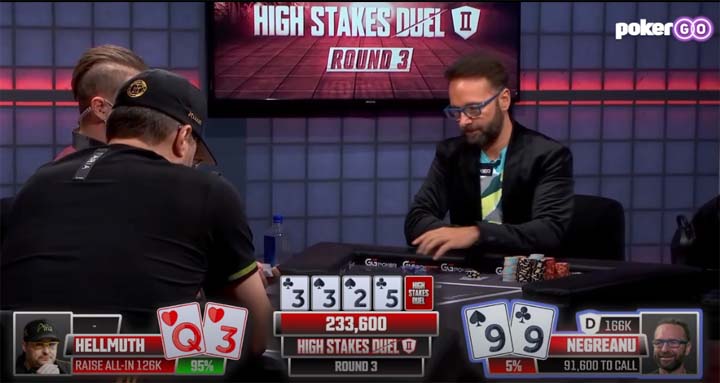 Negreanu wasn’t discouraged by this development, though. He kept on playing as the shorter stack for another two hours, threading the waters and waiting for his opportunity.

The opportunity came when he was finally dealt two red kings and was more than thrilled to get all the chips in the middle against Hellmuth. The excitement was short-lived, though, as Phil turned over the other two kings, and it looked like all that action would result in a split pot.

Poker gods had different plans. The flop came with three diamonds, giving Negreanu a flush draw. The turn was a red card, but of the wrong suit. The river, however, brought the fourth diamond, upgrading Daniel's hand to the nut flush, and just like that, the two were almost even in chips. 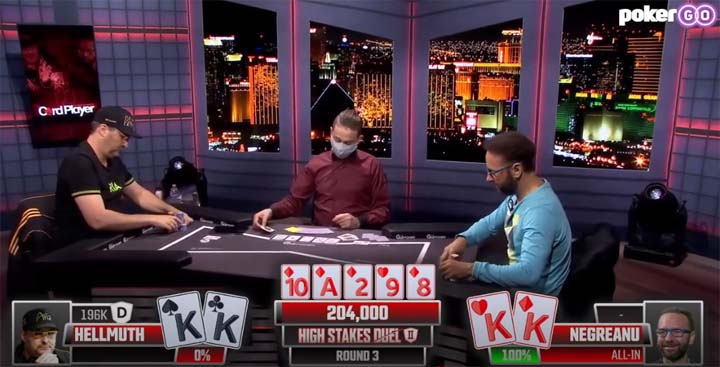 Once again, the two went into the fifth hour of play with stacks almost even and blinds increasing. There were some more significant pots on both sides, but it was becoming pretty clear that the winner would be determined by some sort of a cooler hand, and that's exactly what happened.

The final poker hand of the evening started harmless enough, with Negreanu limping from the small blind with 5s7s and Hellmuth checking his option holding 10d6d. The flop came 2d7s9d, giving both players a gutshot and Hellmuth also picking up a flush draw to go along.

Things got heated up on the turn when the 8h completed the straight for both players, and it wasn't long before all the chips found their way to the middle. Daniel got the bad news when Phil turned over his hand, realizing he was drawing dead to a chop.

Unfortunately, the Canadian couldn’t find the three-outer on the river to save the day, as the dealer burned and turned the river card in the form of irrelevant 3s. Hellmuth had Negreanu out-chipped, and that was that. The “Poker Brat” won once again!

Who Will Challenge Hellmuth Next?

Daniel Negreanu has officially been defeated in the High Stakes Duel as he’s run out of challenges. Hellmuth continues to be an undisputed king of these duels as he’s now dispatched Antonio Esfandiari and “Kid Poker.” So, who’s next?

Many fans would like to see Doug Polk take on Phil in the High Stakes Duel arena, but this isn't very likely to happen. While Polk is the master of heads-up play, the freezeout tournament format with increasing blinds doesn't provide enough room for his skills to really show. He'd probably much prefer a match with rules similar to those he had against Negreanu.

That said, it shouldn't be too hard for Hellmuth to find the next challenger, and the new duel is probably already in the making. We can only hope it will be as entertaining and dynamic as the last one, although that might be setting the expectations a bit too high. 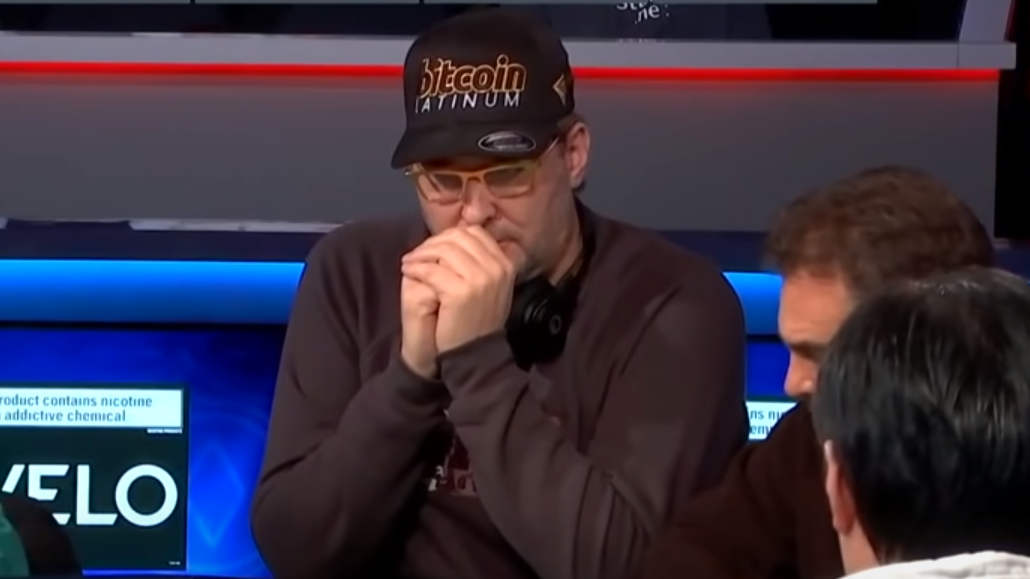 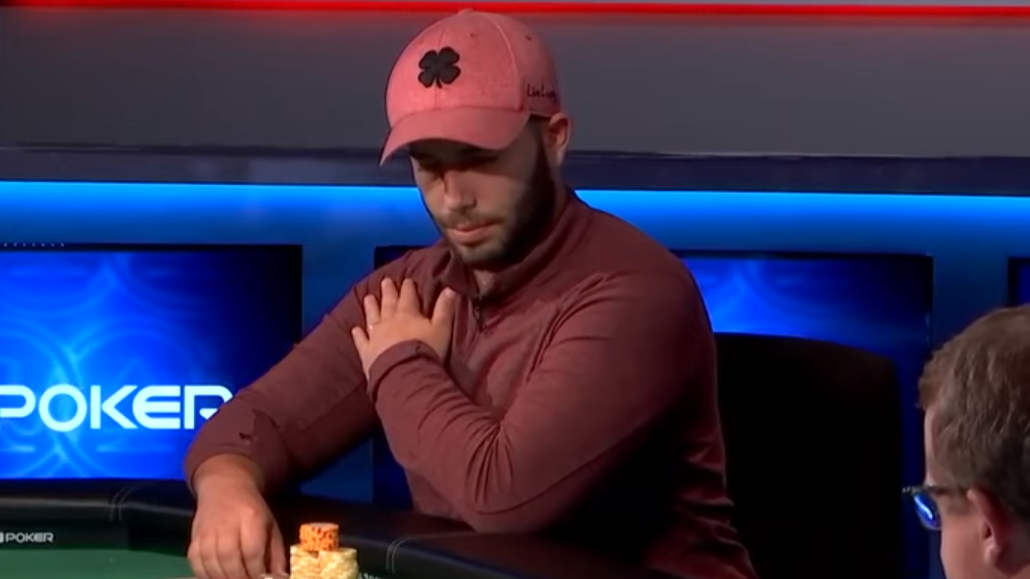