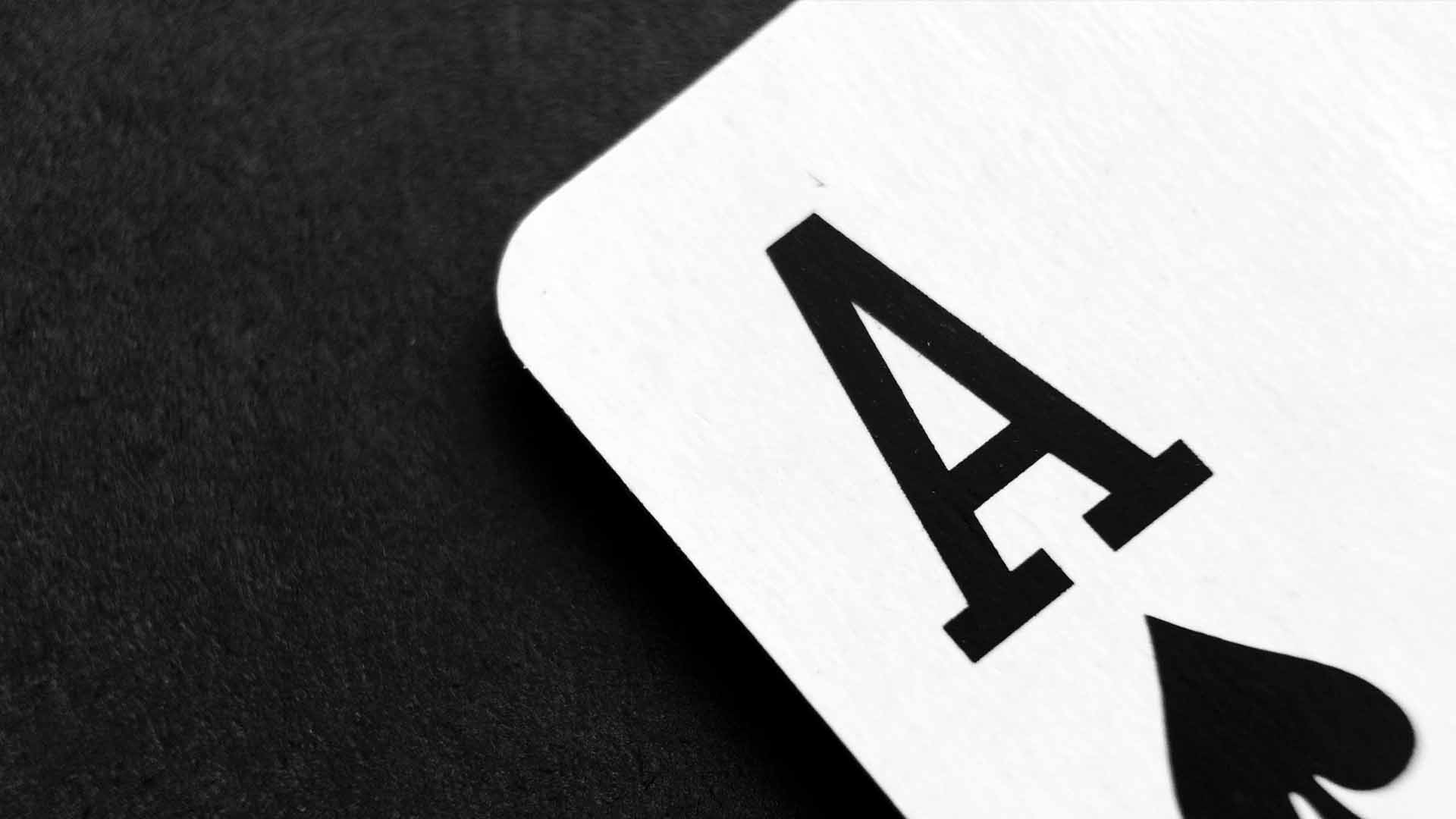 There are many concepts that can help increase online poker win rate. You can get the best rakeback deals, find the easiest games or concentrate on improving your strategy, and today, we are going to touch on the latter and analyze how you should be using blockers in your games.

The concept of blockers is a fairly new addition to advanced strategy, and players often question the degree of value of ideas behind it.

While it may be true that you shouldn’t overvalue them, being able to consider certain blocker cards in a particular situation certainly has its merits and is a valuable addition to your overall game plan.

Poker Blockers in a Nutshell

If it weren’t clear from the name, blockers are cards that prevent certain poker combinations, either appearing on the board or as your opponent hole cards. The simplest example to explain blockers is using a flushing board, i.e., there are three hearts on an unpaired board, and you have a loan Ace of Hearts.

Although you don’t have a flush, you can be 100% certain that your opponent doesn’t have the nuts (provided there are no straight flushes possible, of course).

The idea of blockers is closely connected with range considerations. If you can put your opponent on a certain range of hands they’re opening or calling with from a particular position, you can apply the blocker concept much more effectively. So, it is another element you can add to your hand analysis, which can help you navigate difficult spots and decide whether to call, fold, or raise.

The idea of blockers can be applied in quite a few different situations in Texas Hold’em. Some of the more common spots are:

Each of these situations is different and requires some analysis of its own, so we’ll try to go through some examples and explanations for various spots representative of these different situations that you may find yourself in.

Value of Poker Blockers Before the Flop

Historically looking, blockers were probably first applied to pre-flop situations. If we break things down, the math behind these ideas is quite simple, i.e.

There are just four Aces in the deck (despite the fact one somehow always seems to hit the flop when you have pocket Kings). So, the total number of combinations of pocket Aces (or any pocket pair, for that matter) is six. If we have just one sole Ace in our hand, that number of combos is actually cut in half, which is pretty big. 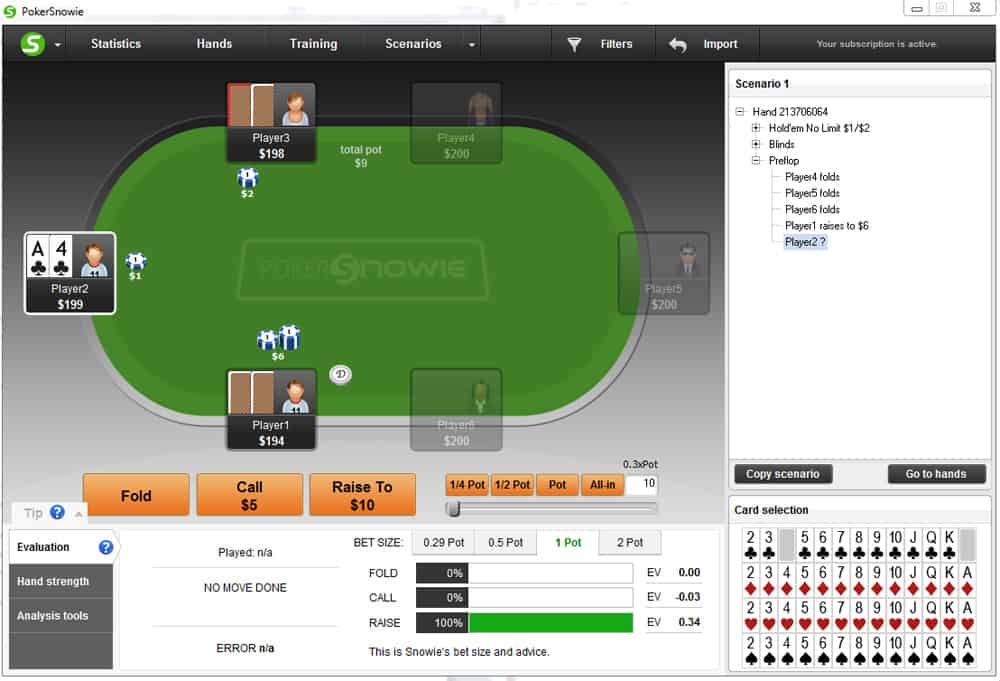 According to PokerSnowie, a poker tool designed to evaluate the best play in different types of scenarios, we can see that 3-betting a button raiser with a hand such as A-4 suited is the most +EV play. This isn’t based on the hand strength alone but the blocking value of the Ace, as the chances of our opponent having an Ace (or a couple of them) are reduced. 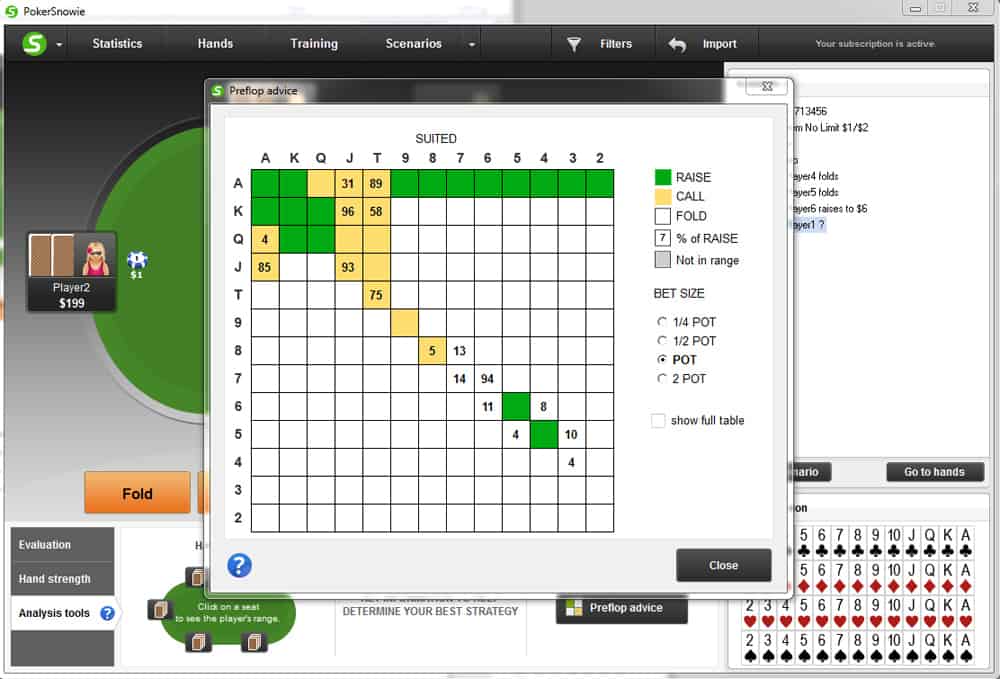 Looking at the button vs. cutoff dynamics, we can see that PokerSnowie suggests 3-betting a decent number of hands that you wouldn’t consider premiums. However, hands like small-suited Aces play very well postflop in position, and there is definitely the additional blocking value attached to them.

You can get my FREE poker hand cheat sheets here:

It is interesting to look at this same situation when the action gets back to the original raiser. If we are going to include some hands containing blockers into our preflop 4-bet range, Snowie suggests a few small suited Aces, but it advocates for a big 2x pot bet. This line provides for the maximum fold equity when we don’t have a premium hand and goes for the maximum value when we do, so it really puts the opponent in a tough spot. 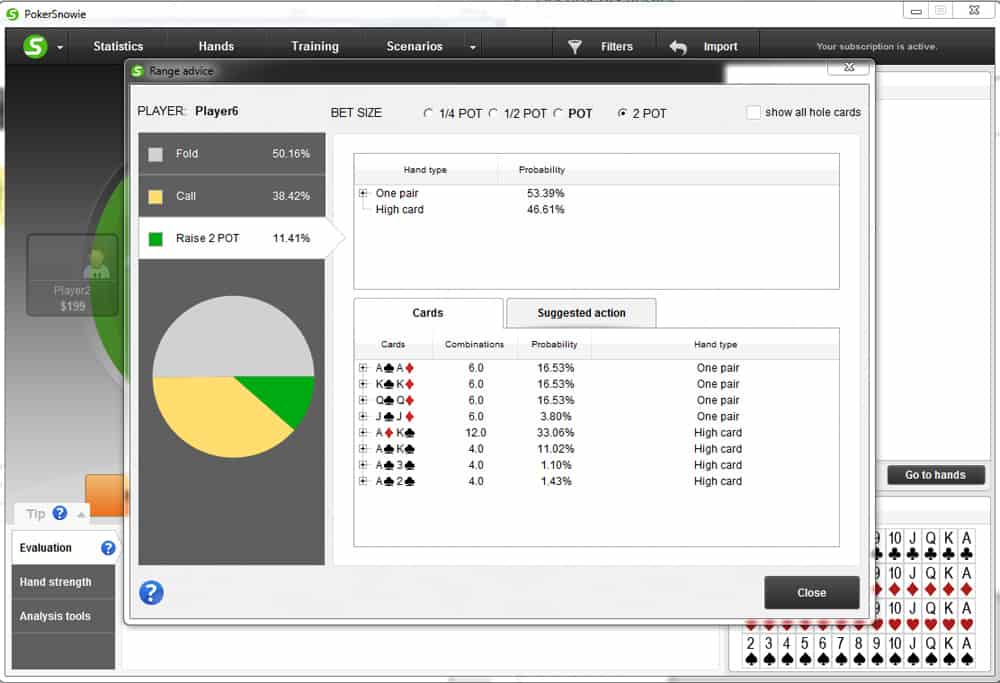 Adding Value to Your Bluffs Using Blockers In Poker

There are certain spots where you can use blockers to make creative bluffs that really put players in difficult spots. These are usually scenarios where you have a card (or cards) blocking the nuts (or virtual nuts), meaning you can be absolutely certain what your opponent doesn’t have.

By taking your blockers into consideration, you can sometimes play a hand in a way that puts them under maximum pressure, as they have no real way of telling if you have the nuts or not. 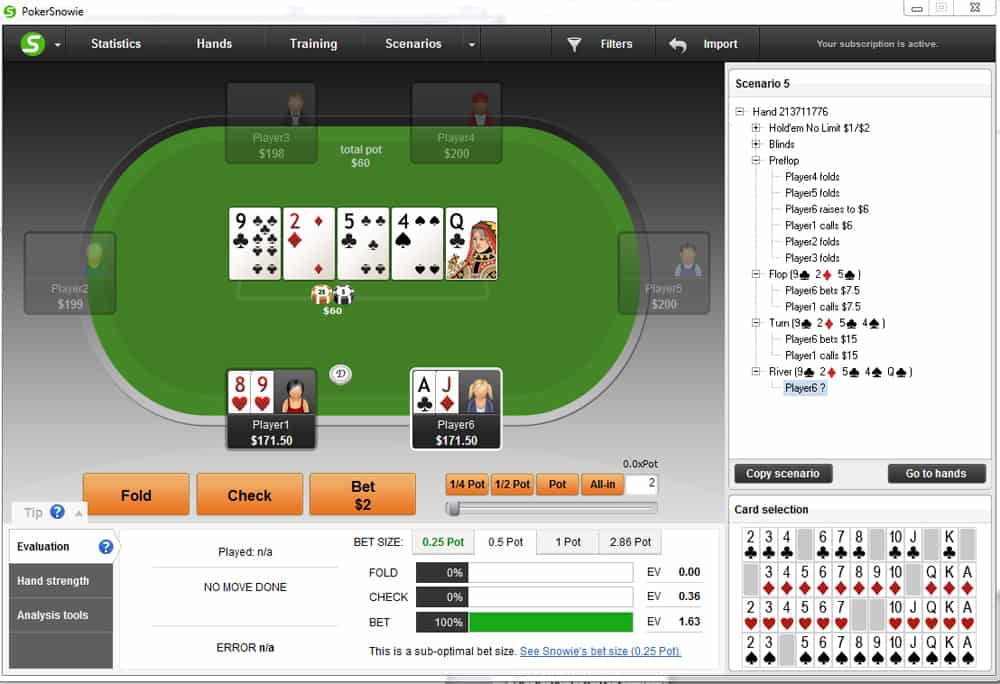 In this hand, we've fired two barrels on the flop and the turn and got a decent river card. That being said, with us having the Ace of Clubs, i.e., the blocker to the nuts, we can continue firing pretty comfortably, knowing that our opponent will have a hard time making the call.

The fact that we have the Ace of Club also makes it less likely they were chasing a flush as well, so our line looks pretty credible.

This is another interesting situation to look at: 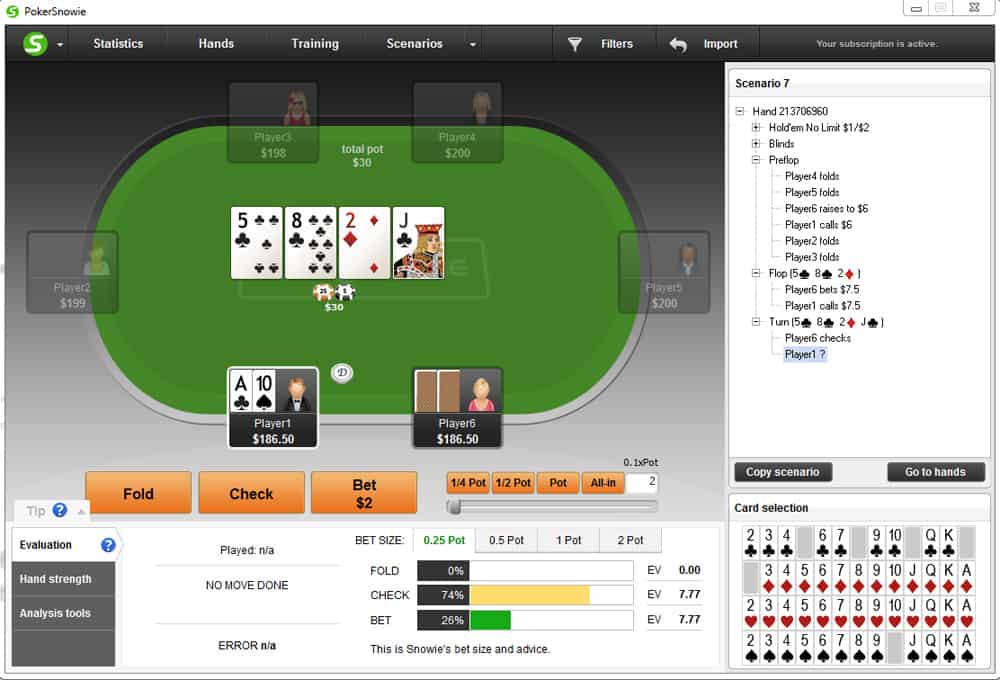 Here, we've decided to float in position to see the turn, and on the turn comes a scare card, i.e., another club. With our opponent checking to us, we can bet pretty comfortably, knowing that they can virtually never raise as it is impossible for them to have the nuts in this situation.

So, even if they do call, they'll be giving up control of the pot, and we can decide on different rivers.

They do end up calling, and we proceed to see the river that is a complete brick. They check to us once again. 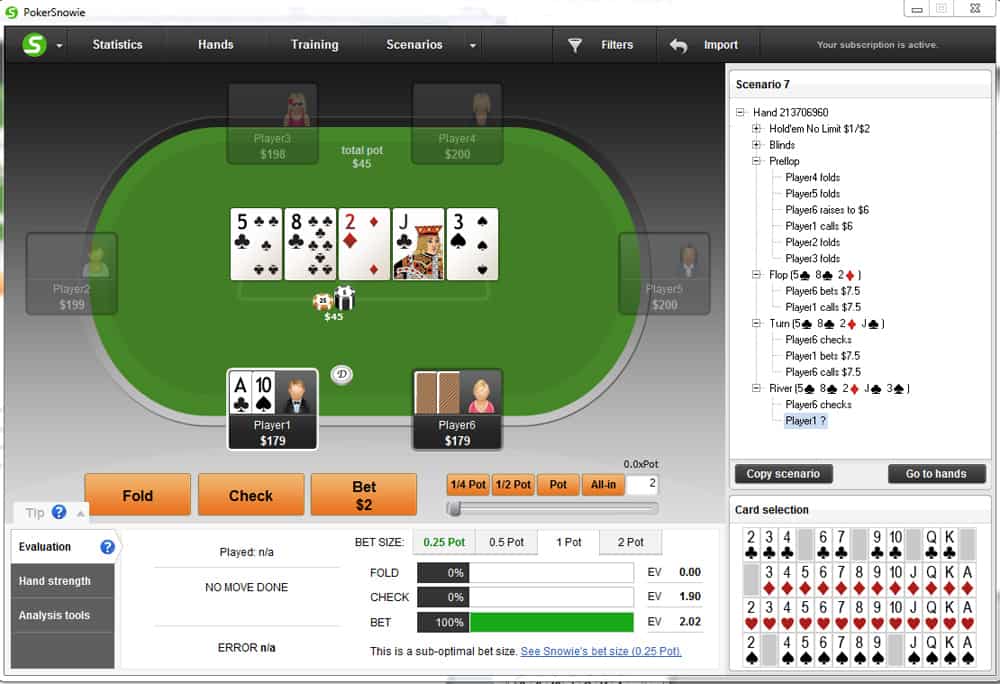 This is where the value of blockers really comes into play. You can fire out a big bet on the river, representing the absolute nuts, and it is hard for your opponent to really know if you're bluffing or you actually have it.

Of course, the bet size in these spots usually needs to be on the bigger side to maximize your fold equity, so you need to balance it out by sometimes doing the same when you actually do have the nuts.

Additionally, always check out your opponent's stats. If they are someone who doesn't really like to fold and will station you with a wide range of hands, there isn't much point in trying to rep the nuts. This play is most effective against players who'll actually have some idea of what it is you're trying to represent and will factor that into their decision-making process.

Finally, you can consider blockers when deciding whether to make a call in a difficult spot. It is pretty much the same concept that is applied in bluffing spots, only reversed.

If you're the one holding the Ace of Clubs on a similar board texture, but it is your opponent who is betting relentlessly on all streets, you can stop to think about what it is they're representing. Since you know they can't have the nuts, the question becomes how can they play so aggressively without knowing your holdings.

This might help you catch an occasional bluff here and there, especially on the river, as many players tend to make huge river bets with polarized ranges in one of two scenarios:

And you already know they don't have the nuts!

Of course, don't take this as an excuse to just start calling people down with Ace-high hands left and right. Competent players will still go for value with good flushes even if they're not the absolute nuts, so don't level yourself into thinking that they could only be betting on a bluff.

In these scenarios, it is important to consider the entire hand and put together as much information as possible before making the decision. Having a blocker to the nuts is definitely valuable, but don't overestimate it, as it will cost you money if you do! 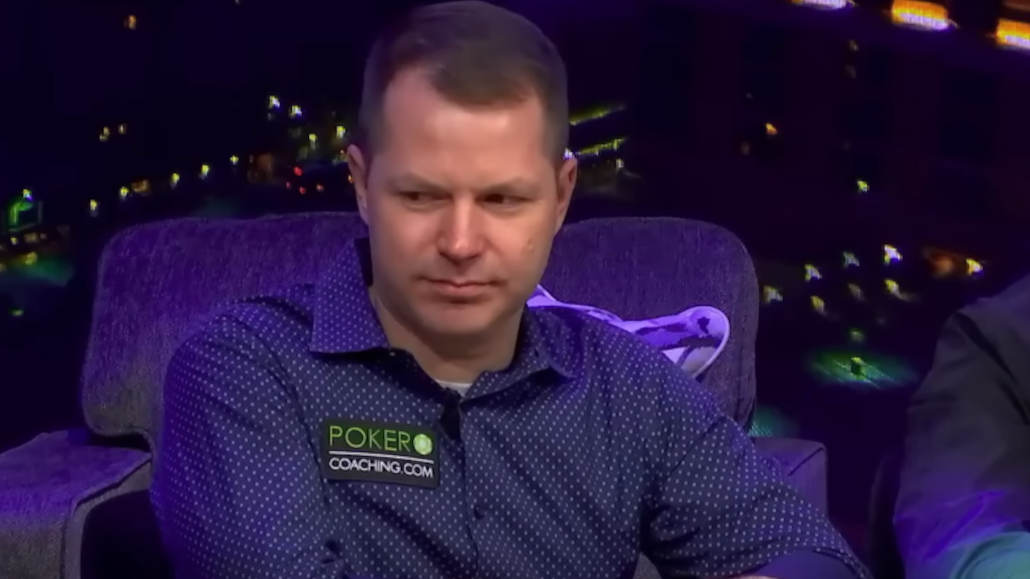 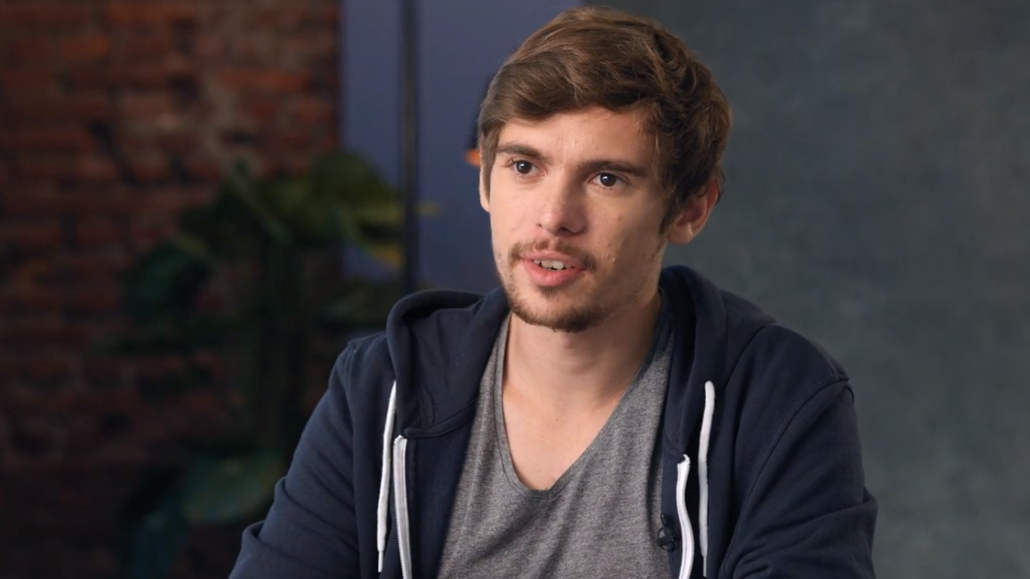 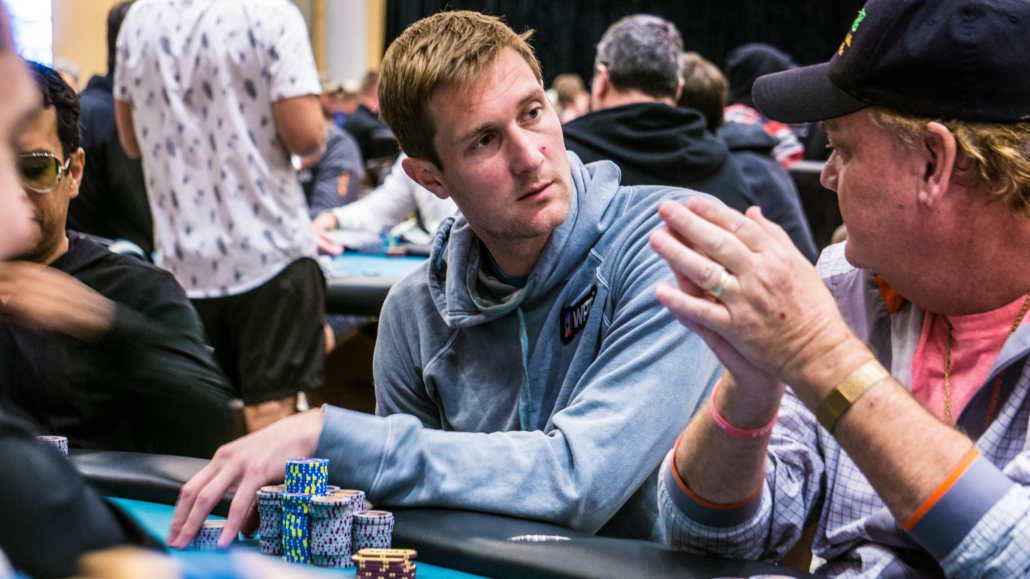 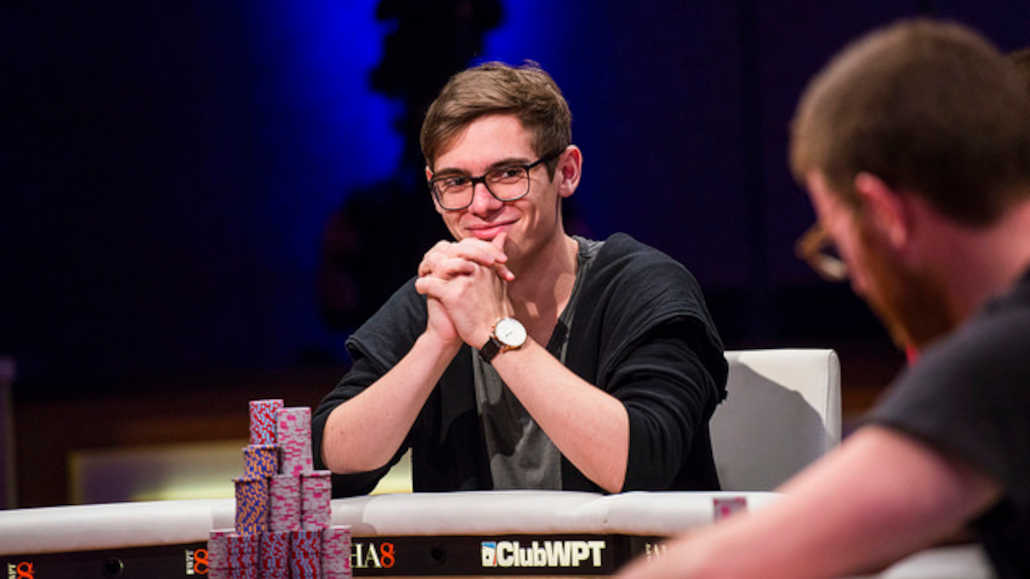