While most poker players look at a deck of cards as a mere prop to play their favorite game, there are those who have gone far and beyond to answer some of the most popular questions regarding playing cards.

For a lot of players who pay attention to detail, the biggest mystery seems to be the suicide king card and its origins.

In this article, we will try to answer all of the questions regarding the suicide king, i.e. the infamous king of hearts, to understand what makes this card so special.

What Is the Suicide King Card?

Although they might seem just like ordinary paper with numbers and pictures, according to some, modern theories, playing cards are full of symbolism.

This has a lot to do with the fact that their origins go back hundreds of years.

For example, you might not be aware, but the four king cards in the 52-card decks are depictions of actual rulers from history:

There are some sources that claim that the King of Diamond represents Roman Caesar Augustus and not Julius Caesar.

Some online websites also claim that the King of Hearts depicts the emotionally disturbed Charles the Seventh and not Charles the Great.

Is Charles the Seventh the Suicide King?

If we take into account that three king cards represent kings or rulers that are considered some of the most notable leader figures in history, it doesn’t seem likely that the King of Hearts would represent Charles the Seventh who was said to be a weak ruler.

However, since there are some stories online of why he is represented on the King of Hearts, we decided we should mention them and allow you to decide for yourself. 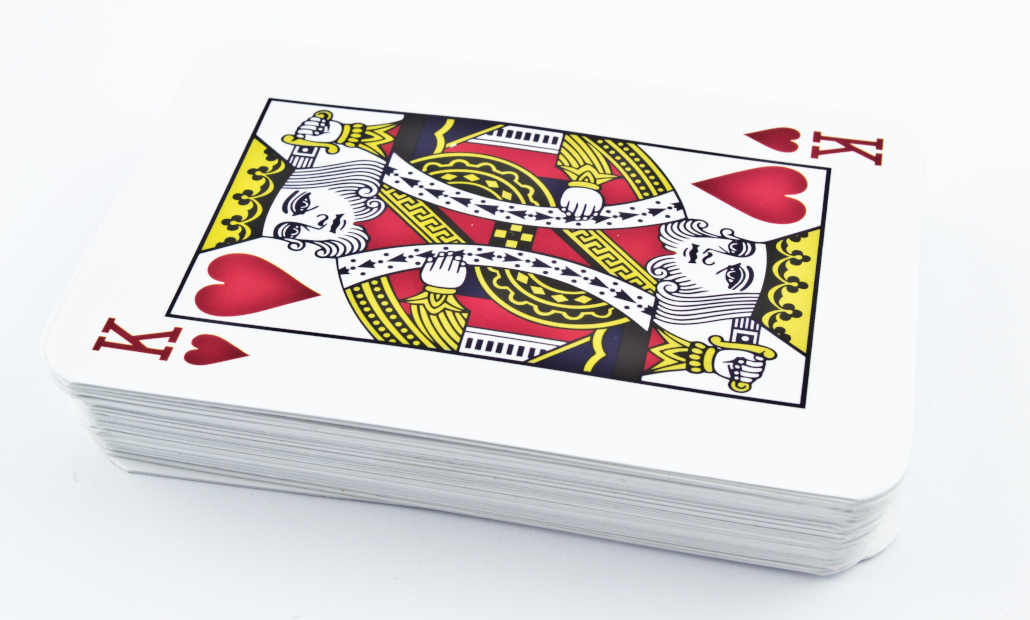 The story says that Charles the Seventh is the only king that was still alive when the playing cards were issued and that this impacted his life.

According to this source, although Charles the Seventh was depicted on the playing cards early in his life, he would go on to rule for quite some time before he became aware of this.

At one point in his life, he got sick and the doctors informed him that he would spend the rest of his life in bed.

From this point on, to deal with boredom, he started playing card games to pass time, especially the early version of Blackjack.

After playing cards for two years, he started obsessing about the cards, claiming that they were the source of his bad luck, at which point he was considered insane.

One day, one of his servants walked on him wielding a sword and rambling about the truth behind the number 13, after which he took his own life with a blade to the head.

After the incident was made public, the image of the King of Hearts was altered to depict a king stabbing himself in the temple with a sword – committing suicide.

Over the years, the image was additionally altered to show a less graphic scene of a king taking his own life.

This particular theory is of a new origin and it is fan faction more than anything else, but it’s an interesting story (no matter how unlikely), so we decided to include it in this article on the Suicide King card.

The King of Hearts According to History

Although the story about Charles the Seventh and playing cards sounds interesting, it doesn’t seem very likely according to history.

Historians say that the four kings on the playing cards are depicted as rulers with their weapons out, ready to go to war.

These are the four kings that are represented on the French playing cards from the 18th century, more commonly known as the “Paris Pattern.”

This deck consists of 52 playing cards with four suits, as well as both number and face cards. It has the exact same structure as the playing decks used in today's card games.

However, not many people are aware that there is also the Paris Pattern version of the deck with 32 cards, which is the more popular version in its native France. 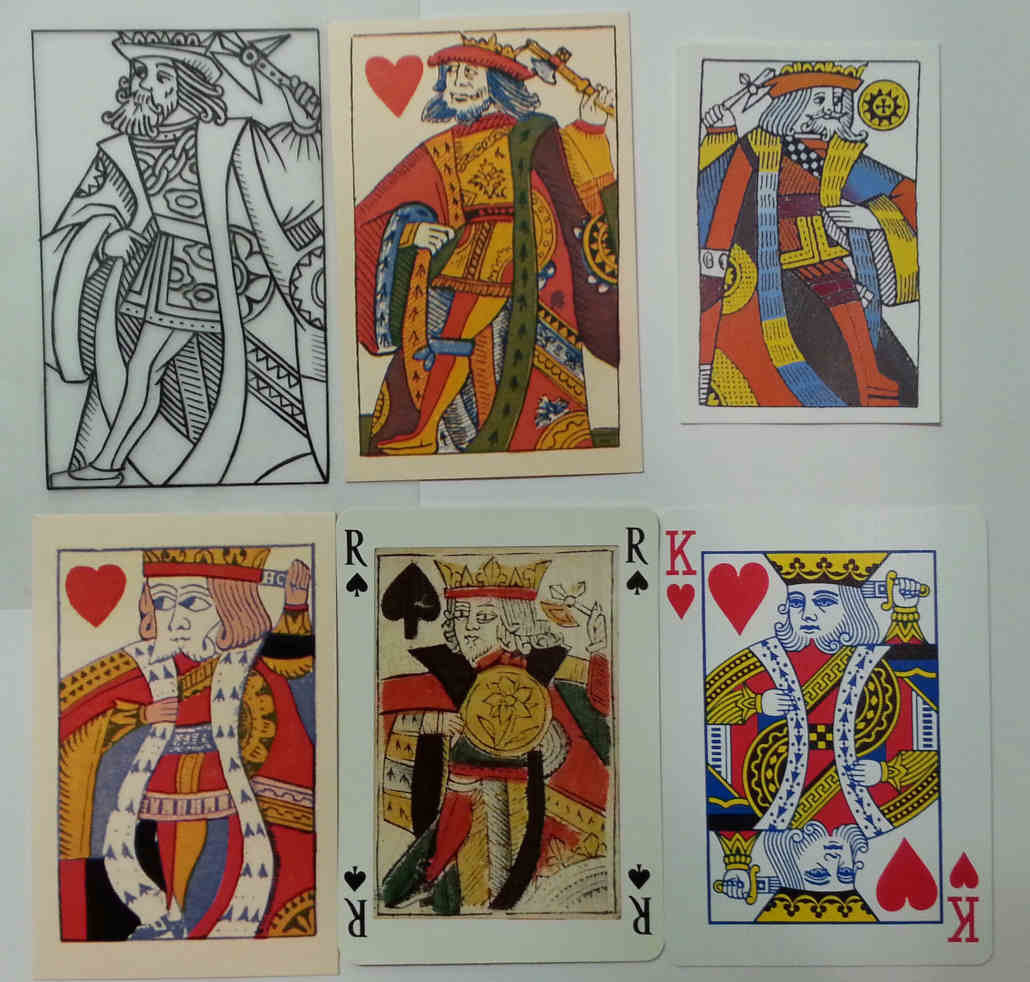 Sometime around the 16th century, the French playing cards found their way to England. It was here that the representation of the face cards changed significantly due to the fact that it was hard to make exact copies of the original cards.

In the original card deck, the King of Hearts was holding an axe and not a sword, and while there is no exact information about when the change was made, many historians believe that it happened when the cards were introduced to England.

The King of Hearts card went from depicting a brave king wielding his axe in words to depicting a weak king trying to take his life with a sword.

Additional Details That Make the King of Hearts Stand Out

In addition to the fact that he is the only king in the deck who is shown as trying to take his life, there are a few other details that make the King of Hearts stand out.

The next noticeable difference between this card and the three other cards that represent rulers is the mustache. All of the kings in the deck have mustaches except for the King of Hearts.

Just like with his weapon, it is believed, that in the original, this card had a mustache but lost it during the early reproductions of the deck which were done manually.

During this time, manufacturers used wooden stamps which would wear off with time, making the prints less and less vivid.

With this said, it still remains a mystery how the other three king cards still show mustache if they were reproduced in the same way.

Also, before the 19th century, the King of Hearts was depicted wielding an axe just like the King of Diamonds, which was replaced with a sword.

Another interesting adjustment is that the King of Diamonds playing card kept its original weapon to this day.

And finally, in the double-ended version of playing cards, the Suicide King is shown as the only king card with four hands.

Over time, the King of Hearts has become a subject of many historians who dedicated their time to find out why the Suicide King card is different from the other king cards in the deck.

Thanks to their research, many of the mysteries surrounding the King of Hearts playing card now have explanations.

The Position of the Sword

The main reason why the Suicide King card got this name is because of the angle at which the sword is shown on the playing card.

If you take a look at some earlier versions of the card, even those in which the axe was replaced with a sword, you will see that the sword is shown in a more upright position than in the modern version. 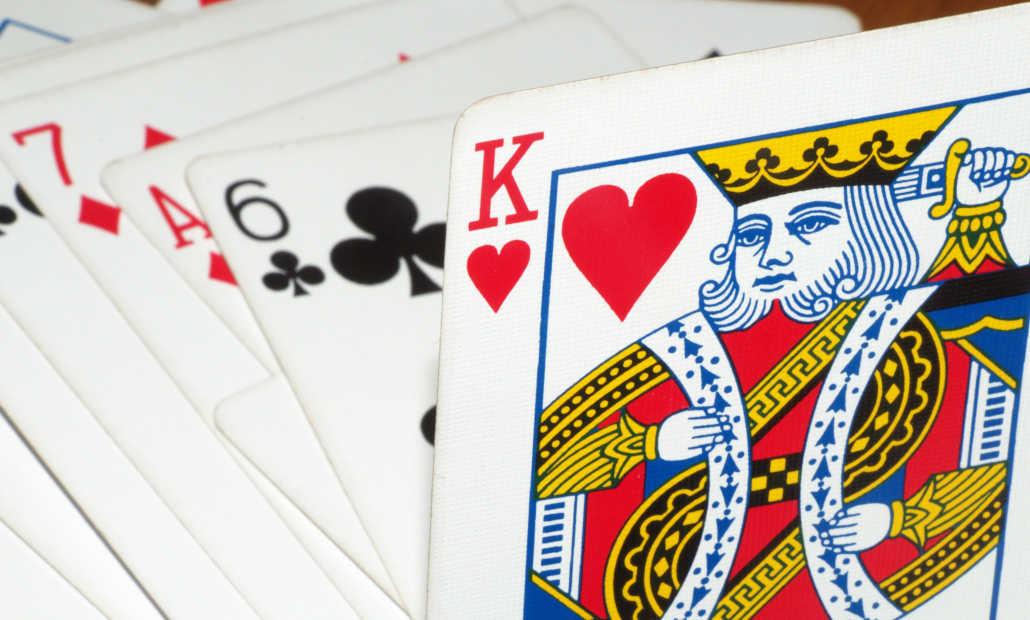 This position of the sword is mostly used by commanders to signal an attack or some sort of advancement of the troops.

Additionally, in chest-to-chest combat, wielding a weapon in this way would mean that the protagonist is trying to strike a final blow since it is almost impossible to defend yourself when you swing a sword behind your head.

According to an English legend, there once lived a king who had four sons, and when he was at the end of his life, he decided to split his kingdom among the ones that had mustaches.

One of his four sons did not have a mustache, so he lost his inheritance.

Some historians believe that this legend was the reason why the English removed the mustache from the King of Hearts playing card.

On the other hand, some people believe that the Suicide King does not have a mustache because it depicts the purest organ in the human body, the heart.

Because it is impossible to disguise the feelings of the heart, the King of Hearts does not have facial hair.

While for most of us, each card in the deck is only as important as its strength in poker or another game we love, it is interesting to see how the playing cards have changed and evolved throughout history.

The King of Hearts certainly seems to be one of the most interesting cards in the deck, not only because of its name or the way in which the character is depicted, but also because of the history, lore, and the speculation it is surrounded by.

It once more shows that even the tiniest of details can spark human curiosity and imagination to write some incredible stories.