Cribbage Rules – Learn How To Play This Amazing Card Game 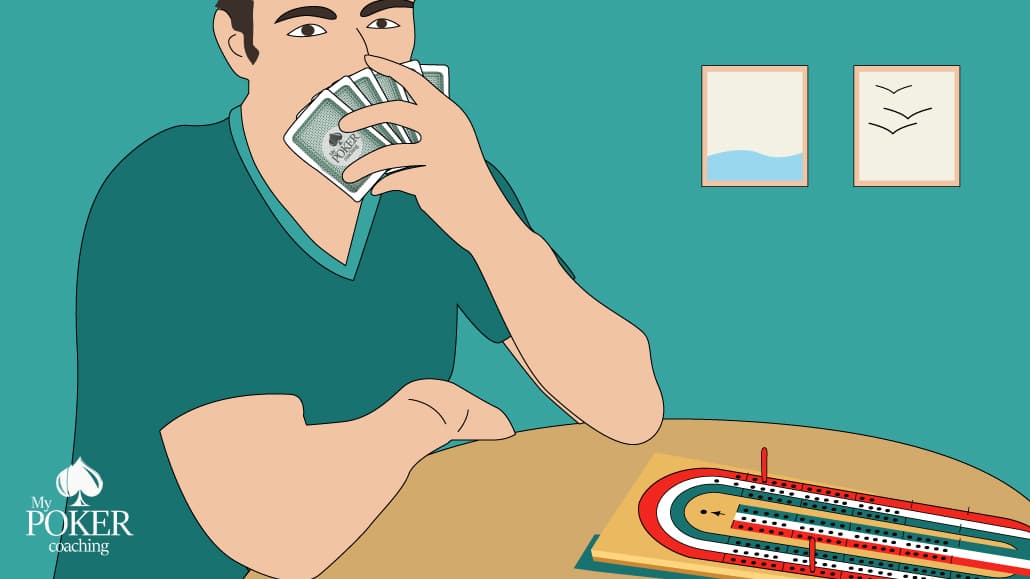 Cribbage Rules – Learn How To Play This Amazing Card Game

If you’re looking for a card game that you can learn and master in a matter of minutes, keep on looking because cribbage isn’t it. While you can quickly learn how to play Go Fish, the rules of cribbage can be quite confusing, so it will take some time to learn them all.

However, once you do, this game is a lot of fun to play, and you won’t regret the invested time.

The good news is that by the time you’re done reading this article, you’ll learn how to play cribbage.

You’ll probably need to come back to it a few more times before you truly master the game, but don’t worry about it and take as much time as you need to learn it because cribbage becomes really entertaining once players know all the rules and can play it quickly. 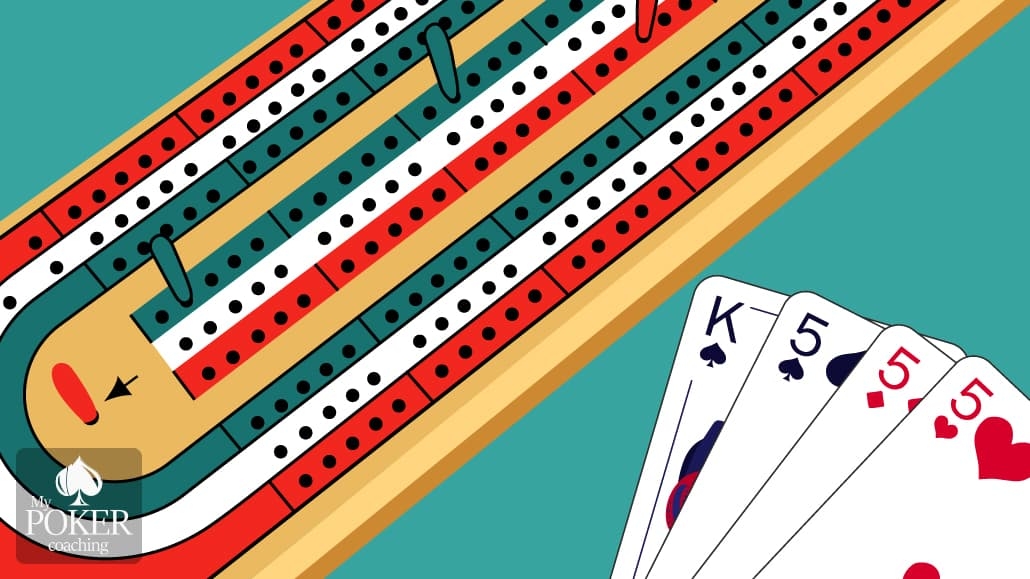 Before you’re ready to play cribbage, you’ll need some preparation. The most important part is a deck of standard playing cards. The game doesn’t use jokers (wild cards), so you’ll just need the standard 52-card deck.

Another useful prop is the cribbage board. The board is used to keep track of the score during play.

You can keep score by using pen and paper, but having the cribbage board will make the game more entertaining and faster.

Finally, you’ll need at least one more player to join you. The game of cribbage usually includes only two players, although a third player can join as well.

Cribbage rules explained in this article are focused on a two-player game, but I’ll also explain how to play cribbage three-handed. 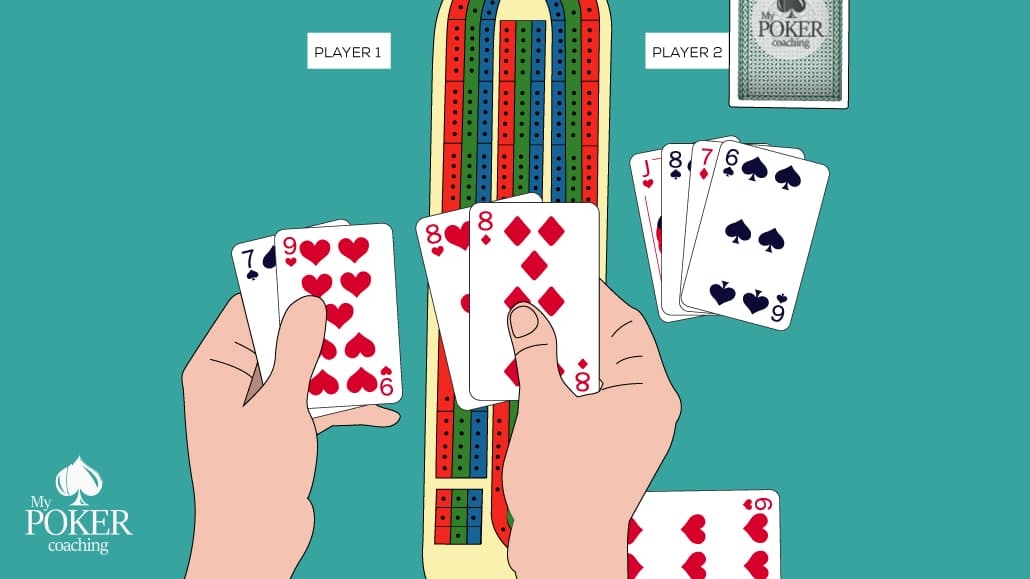 Cribbage is a fast-paced game that includes many rules, especially in terms of cribbage scoring. It’s very important to read this section on the rules of cribbage slowly and carefully to try and keep up.

It will probably feel quite complex at first, but things will quickly fall into place once you start playing.

The Objective of Cribbage

A cribbage game's objective is to reach the preset points mark – usually 121 or 61 – before the other player.

You’ll get points for achieving certain goals in the game, which will be explained in a moment. Once a player reaches 121 points, they win immediately, even if they’re only halfway through a hand.

To start the cribbage card game, both players will cut the deck, and the one who cuts the lower card will deal first.

These four cards make up what’s known as the crib. For the time being, you can disregard the crib, but it will come into play later on.

In cribbage, all cards have their face value except for picture cards, all of which have a value of 10, and Aces are counted as one.

So, when you add up a King and a 5, that makes a total of 15. Another face card would make the running total of 25, etc.

Keep this in mind as knowing these values are essential for the gameplay.

And now comes the really hard part – cribbage scoring. For now, I’ll just list the different scores for you to look at.

These probably won’t make too much sense until you’ve read the next section on how to play cribbage, so you can even skip the list and come back to it after reading about the actual gameplay.

How to Play Cribbage 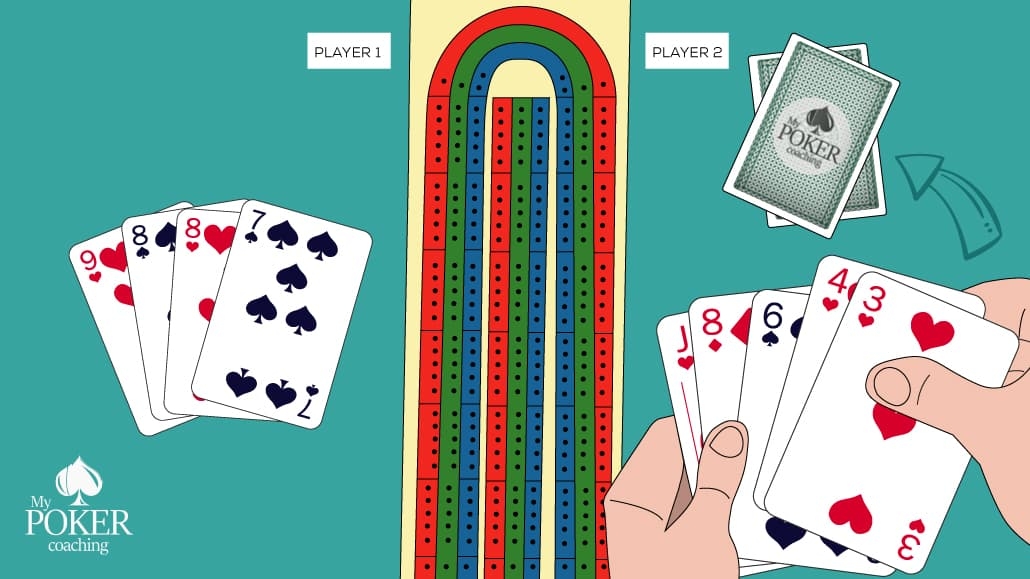 Understanding the rules and principles of cribbage scoring is helpful, but things only start to make sense once you start playing the game.

After you’ve played a few rounds, you’ll realize that the game isn’t as complicated as it may seem initially, although it might take you a little while to become quick at adding up your points.

Once cards have been dealt and the crib created as explained in the dealing section, you’re almost ready to start playing.

The non-dealer cuts the deck, and the card is drawn from the top of the bottom half of the cut.

The deck is put together, and the drawn card is put on top of it, face-up. This is the starter card I mentioned earlier, and it will be used during the round.

This is a good time to mention that cutting a Jack of any suite will immediately earn you two pegs.

Now that the scene is set, the play can begin.

Round 1 of Cribbage Game

The first round of play begins with the non-dealer putting one of their cards face-up on the table, announcing its value. For example, if you play a 5, you’ll announce “five.”

The dealer will then discard one of their cards face-up and announce the running total, i.e., the sum of your card and their card. If they play a 9, they’ll announce “14”.

The action goes back to you, and you can play any card from your hand by placing it on the table in front of you and keeping the running total.

You can earn points during this round in several ways:

Once it’s no longer possible to legally play any cards, the running total will go back to zero, and the player who announced the “Go” gets to play first, and the same scenario repeats.

Once all cards have been played out, the player who gets to place the final card will earn 1 peg.

After all cards are out, and all points from the first round have been accounted for, round 2, i.e., the counting round begins.

During this round, players get to use their four cards and the starter card that was set earlier.

So, everyone uses five cards to try and accumulate as many pegs or points as possible.

The non-dealer gets to go first on this round. They’ll take their four cards and try to make as many points’ awarding combinations as possible, also utilizing the starter card to achieve this goal. 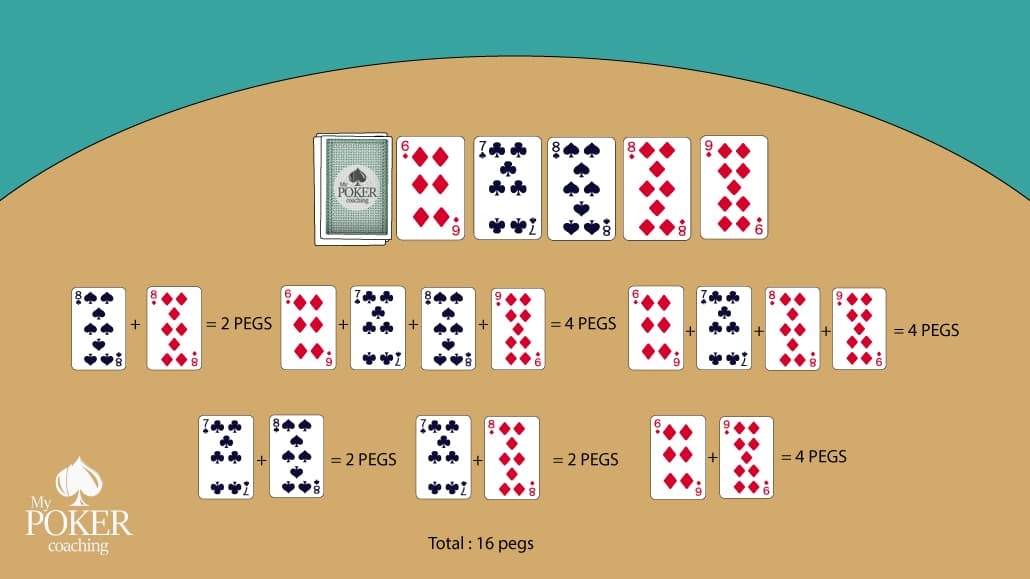 Here’s an example where you have a starting hand of 7c 8s 8d 9d, and the starter card is 6d.

This is a total of 16 pegs, which add to any pegs you accumulated during the previous round.

Once you’re done counting your pegs, the dealer gets to do the same.

If no player has reached 121 points, i.e., the game wasn’t completed, the dealer also gets to take the four cards from the crib and combine them with the starter card to make more pegs.

The cribbage board is used to keep up with the cribbage scoring. The board comes with small pegs that you move along the board as you score points, moving them closer to the goal. 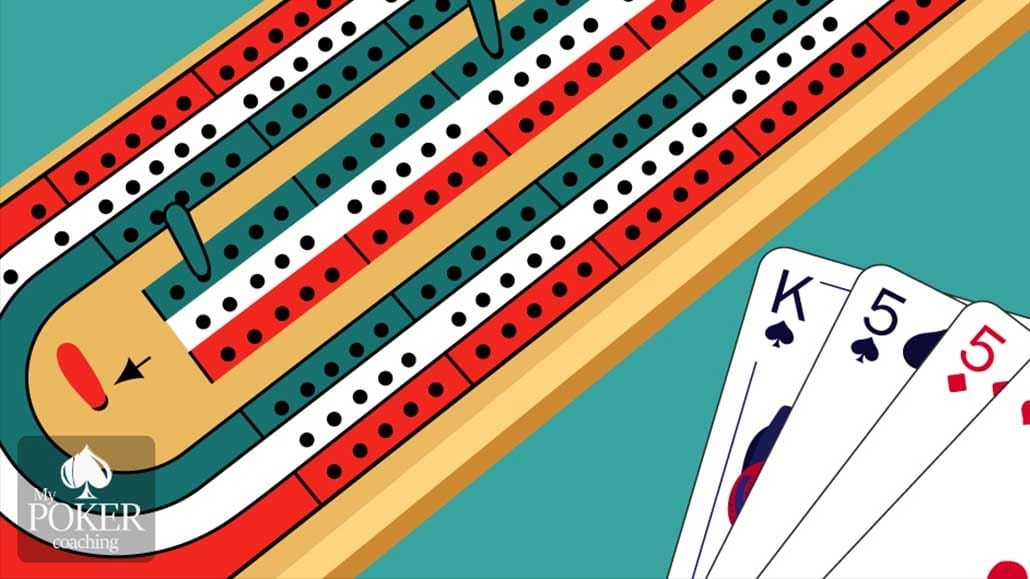 It will take several rounds of cribbage play to complete a game. Thus, the cribbage board is very useful to stay up to date at all times.

If you can’t get your hands on one, though, you can make an improvised tracking system on a simple piece of paper and use any object (such as a coin) as a peg.

How to Play Cribbage with Three Players

Although the game is best suited for two people, cribbage can be played by three players as well. In this case, every player can either receive five or six cards to start the hand.

Other than this, the game plays exactly the same as the two-player version. 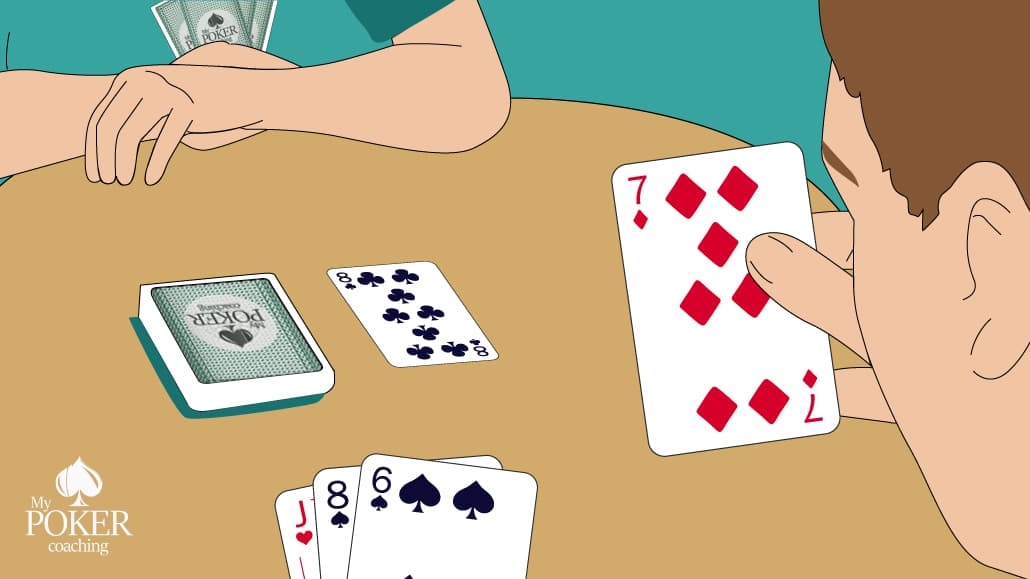 The first and the most important skill you’ll need to practice for cribbage is the ability to add up card values and call them correctly quickly.

In more serious games, if you make a wrong announcement, your opponent will be awarded points.

Fives are very important cribbage cards because they can be combined with all 10s and all picture cards to make 15.

So, you should try your best to avoid discarding these when you’re first to play. Otherwise, you’ll be giving your opponent a shot at some easy points.

Deciding what cards to put into the crib is important as well, and your decision depends on whether you’re the dealer or not.

Since the dealer is the only one who can take advantage of the crib on any round, they want to make it as favorable as possible. The non-dealer wants to prevent this.

As a non-dealer, you should:

The main idea is to prevent the dealer from making many pegs from the crib.

As the dealer, you’ll want to set things up for you, so you should do the opposite. Just like playing complicated poker hands, deciding on what cards to keep and what cards to put in the crib isn’t always super easy or clear but here are a few tips that should help you along.

Of course, when deciding what should go into the crib, you want to break the cards in a way to maximize the points between both hands.

You want to make the crib as good as possible but without hurting the main hand too much.

During play, pay special attention not to play cards that will make the running count 21. If you make the total 21, your opponent will have a very good chance to call the “Go” on the next card as any 10, and any picture card will make 31, winning them two pegs on the spot.

Finally, as the general rule of thumb, the best card you can lead with in cribbage is a four as your opponent can’t make 15 on the next go, and whatever they play, they will make it possible for you to make 15 when the action comes back to you.

Cribbage Rules – Summary Of The Game

Cribbage is a very exciting and thrilling game once you get the hang of it. Things can be a bit frustrating during your learning process, and the slow pace of play might give you the feeling rounds take way too long to complete. This couldn’t be further from the truth.

Once you get good at the cribbage card game, things start moving at lightning speed, which is where the adrenaline kicks in.

This is the way cribbage is meant to be played, and if you love playing cards, you’re going to fall in love with this one if you give it a real chance!