Edge Sorting – What Is It and Can It Work In Poker? 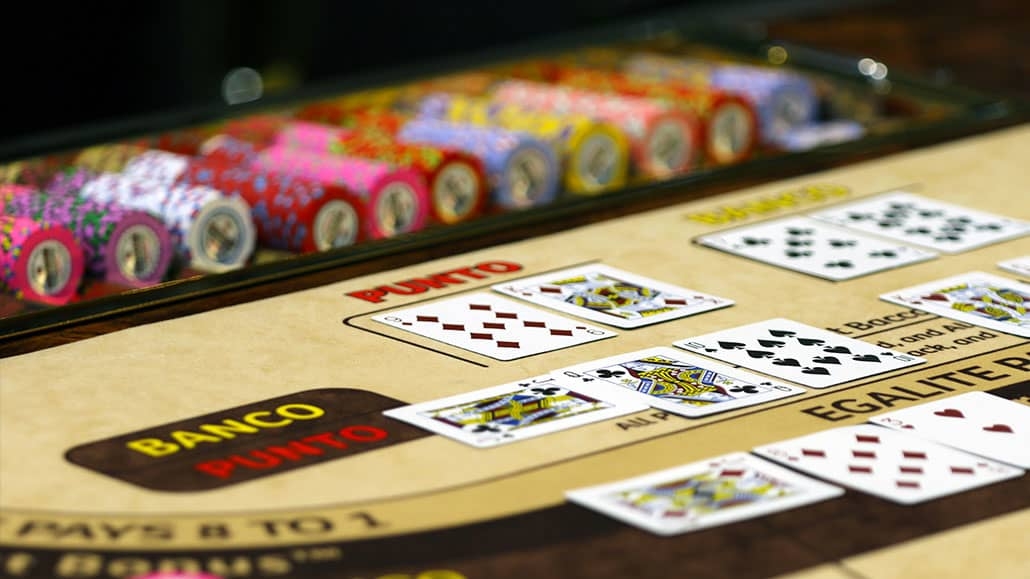 Since the introduction of the first casinos, there were people out there looking for ways to beat the house.

Given the natural setup where a player is always at a disadvantage in games like 3 card poker and other casino offerings, this hardly comes as a surprise. Discovering a way to flip the tables and be the one in control even for a little while sounds like a sweet proposition.

Casino games are usually set up in so that there are very few legitimate ways that can help you remove the inherent house advantage.

This is especially true for the modern-day gambling as casinos have had decades to fix any leaks in their games and find ways to stop people from abusing said flaws.

However, this hasn’t stopped people from looking, and those who looked hard enough were able to find some less legitimate ways to gain the upper hand between cheating and playing the game the way it’s supposed to be played.

Edge sorting is one of the best examples of such a grey zone as it received a lot of media coverage due to the infamous Phil Ivey edge sorting case.

What Is Edge Sorting?

First of all, it’s essential to understand what is edge sorting and how this technique works. Once you know all the vital information, you’ll be able to understand better why not everyone is on the same page as to whether this practice should be considered cheating.

Edge sorting is an advantage play technique used primarily in baccarat, a rather simple casino game that seems to be the favorite of many high rollers in Las Vegas, AC, and around the globe.

It works by taking advantage of slight imperfections on the backs of the cards, giving the player access to the information they shouldn’t have in a natural setup.

To understand what is edge sorting and why it works, you need to know the basic rules of baccarat.

It is a table game played with cards, and the goal is to bet on the winning hand, and the player can choose to bet on both sides – the banker or the player.

The winning hand is the one that has to score closest to nine (9). The hand total is derived by adding together the two cards dealt and then removing the first digit. So, for example, a hand containing an 8 and a 9 would have a value of 7.

All cards 2 through 9 have their face values in Baccarat while Aces are counted as one (1), and all other cards, 10s through Kings, have the value of zero.

So, a hand containing a Q and a 4 would score 4 points.

There are some additional rules that dictate when the player or the banker will have to stand or take extra cards.

The player has no active role here, though, as they can’t make any decisions like when playing blackjack, for example. Whether another card is dealt or not is based entirely on the total sum of the hand.

Now that you know the basic rules of the game, it will be much easier to continue the discussion on edge sorting.

As already explained, this technique takes advantage of imperfections on the backs of the card to provide the player with an unfair advantage. But how exactly does this happen?

Well, if you look at the rules once again, you’ll quickly realize that there are some good cards and some bad cards in baccarat. You want as many 7s, 8s, and 9s in a hand that you’re betting on, and want to avoid small and picture cards.

If you were to know when your value cards were about to come, you’d have a clear advantage, and thanks to edge sorting, you can find out when it’s going to happen.

This is made possible due to imperfections in decks of cards produced by specific manufacturers. The back of the card should be perfectly symmetrical. However, certain decks have small pattern flaws, where edges aren’t identical. 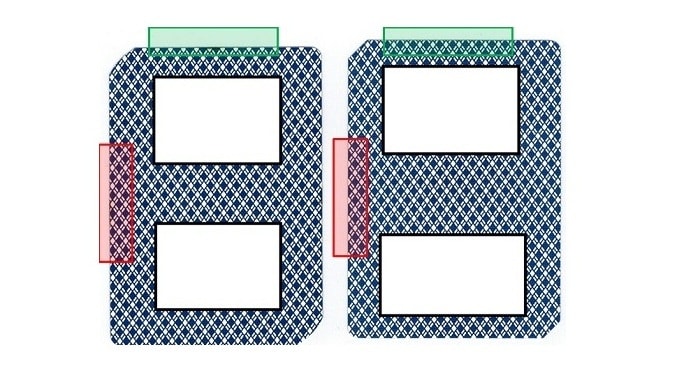 For example, the right edge can have a slightly larger diamonds than the left side. This is a subtle difference, but the one that a trained eye can spot.

Once this type of a deck is in play, a player looking to edge sort will ask the dealer to rotate individual cards. They’ll usually use an excuse of superstition for doing so.

If the dealer obliges, once the cards come back into play on the next rotation, they’ll be arranged in a way that the player knows his or her value cards.

In baccarat specifically, you’d want to rotate all your 6s, 7s, 8s, and 9s. If you know the next card to be dealt to the banker or the player is one of these cards, you’ll gain a significant edge.

This knowledge alone is enough to negate the house edge and put you in the driver’s seat for as long as the cards remain arranged the way you want them.

It Only Works Under Special Circumstances

When you read about edge-sorting, it seems much easier than it actually is. Several requirements need to be met for this technique to work:

If all these requirements are met, the player can gain a significant advantage over the house in excess of 6%.

This is huge as the house edge in most games isn’t that big. Of course, you could still lose in the short term even with this technique, but the odds are on your side.

Casinos don’t like cheaters, and they don’t like advantage players, either. The difference between cheating and advantage play is that the latter doesn’t use any outside means to gain an edge.

Counting cards in blackjack is a perfect example of a pure advantage play, and it’s not considered illegal in most countries around the globe, even if casinos hate it.

But where does edge-sorting belong in this spectrum?

On the one hand, it seems like a pure advantage play – the player doesn’t need any outside means to achieve their goal. They’re only using what casino has provided, i.e., their cards, their chips, and their dealers.

On the other hand, for the edge sorting cards technique to work, the dealer does have to oblige the player and sort the cards in a certain way. Even if the player themselves didn’t make these marks, they’re aware of them and are using them to their advantage.

Is it cheating if you’re playing a game of poker with a marked deck if you weren’t the one to do the marking?

Clearly, there is a lot to discuss here, and many don’t see this technique as cheating. However, judges in two separate Phil Ivey edge sorting cases don’t seem to agree, and the high roller has gotten himself in a lot of trouble for using this technique in London and Atlantic City.

If it weren’t for Ivey and his massive wins in two different casinos, the edge sorting cards technique might have never come to the spotlight.

If you’ve somehow missed the story, back in 2012, the poker legend took London’s Crockfords Casino for about $10,000,000 playing baccarat with his companion Cheung Yin Sun.

The casino felt something wasn’t right, and after Ivey was done playing, they conducted an investigation and discovered irregularities, refusing to pay him his winnings. After the whole thing became public, Ivey admitted he was using edge sorting, but he insisted this wasn’t cheating.

UK courts disagreed. Over the next few years, Ivey’s legal team fought his case on several different levels, but in the end, it was decided Crockfords didn’t have to pay.

This wasn’t the end of the Phil Ivey edge sorting scandal, though. Not long after the London case, AC Borgata came after Ivey, accusing him of taking roughly $9.6 million from them using the exact same technique. Borgata sued Ivey, and once again, the courts side with the casino.

So, the short-lived victory turned into quite a mess for the poker legend. While his Crockfords case is pretty much over, Borgata is looking to get their money back, which has had quite an impact on Ivey’s career.

During last year’s WSOP, he was denied his winnings from one of the events as Borgata lawyers caught wind of the fact.

What this means is that Phil likely won’t be spending much time (if any) playing tournaments in the US for the foreseeable future.

The casino won’t give up on their efforts to reclaim what they had lost due to edge-sorting, and Ivey certainly won’t be playing in tournaments where he is pretty much guaranteed not to get a single penny.

It’s important to note that Ivey wasn’t criminally persecuted in either of these cases, which would likely happen to anyone actually cheating. It does indicate that edge sorting isn’t really on the same level as using third-party software and devices or marking cards, but it’s also not in the same category as card counting.

Every time people hear about a new advantage play technique, they wonder just how big of a scope it has.

Is edge sorting limited to baccarat only, or can it be used in other casino games or even in games played against other players, like poker?

In theory, you could probably use edge sorting to gain an advantage in blackjack if the dealers were happy to accommodate your requests. You would need to rotate different cards, and if you could get the shoe set up so that you can spot picture cards, it would undoubtedly give you an advantage.

However, this can only work in unique scenarios where you’re the only one playing, and no other players are complaining about you holding up the action.

As for edge sorting poker ideas, there is absolutely no way anyone could make it work in poker.

Even if you were in an imaginary scenario where other players allowed you to rotate the cards the way you want and don’t find it weird, you’d gain absolutely nothing from it.

The moment those cards are out, players will squeeze them, rotate them, and play with them. Once they throw them in the muck, they will rotate some more.

You can rest assured that no one is using this particular technique to trick you. While there are definitely some cheaters out there, especially if you’re playing in dodgy private games, they are not doing it by edge sorting cards.

Since you read the article up o this point, you probably understand why this just wouldn’t work, and I hope you will not waste your time by trying to implement any of this in your games.

If you want to engage in some fun activities between your sessions, you can play some casino games or try your luck at theslotslad instead of trying some fancy moves that are not going to work at your tables.

Conclusion: Is Edge Sorting Worth It?

When all things are added up, it is clear that edge sorting cards in baccarat is an effective method to improve your edge. It does work as intended and helps the player gain the upper hand over the house.

Most likely, you will not be able to apply edge-sorting in real-life.

And even if you make it work, as the Phil Ivey edge sorting cases show, casinos could go after you if you take any substantial amount.

All these things considered, I don’t think edge sorting is anything an average player can take advantage of. That said, knowing about what is edge sorting and how it works undoubtedly won’t hurt your chances, and it might come in handy one day. You never know.