Gin rummy often referred to as GIN, is an interesting card game that enjoyed great popularity during the early to the mid-20th century. It’s still played a lot all over the world, and players enjoy it because it features a nice mix of luck and strategy alike.

While gin rummy certainly isn’t nearly as complicated or as technical as Texas Holdem, it is often dubbed a skill game by those who play it professionally.

Stu Ungar, one of the greatest poker players of all times, was a highly proficient gin player before turning his sights to poker.

Learning how to play gin rummy is easy. Rules are quite simple, so you should have no problems picking up on them rather quickly.

Learning how to play gin rummy well is a completely different story, though. If you want to become really good at this game, you’ll need to study some strategies and develop the ability to keep track of the cards that have been played to make the best decisions. 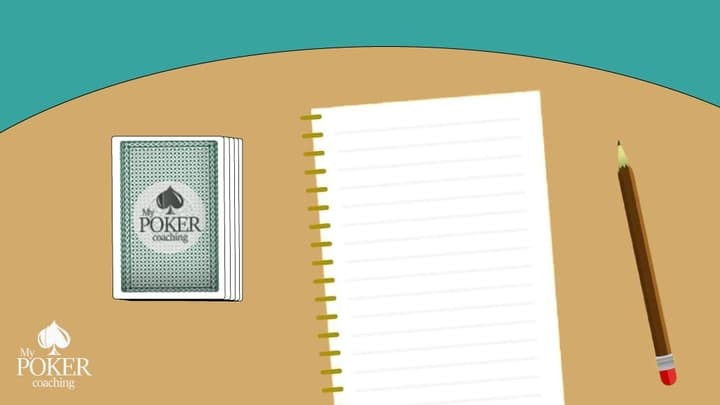 Gin Rummy is usually played by just two players. There are variations of the game that include a third person, but the natural setup features just two opponents.

You’ll need a standard deck of playing cards without jokers as these don’t play.

Have a pen and a piece of paper handy as well to keep track of the score, as ginrummy makes most sense when played for several rounds. 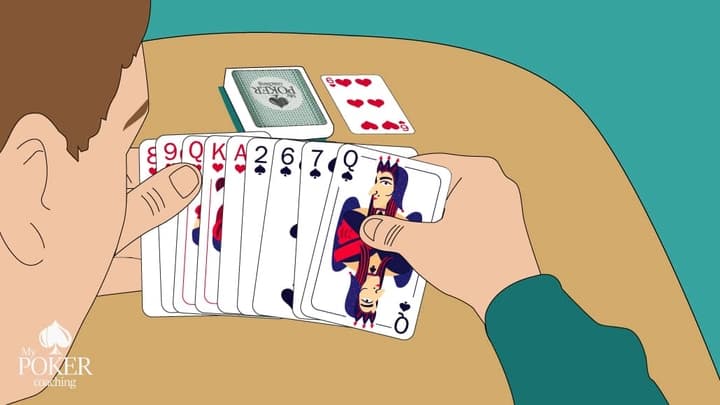 As mentioned, gin rummy rules are quite straightforward, and if you have any experience with card games in general, you'll have no problems learning and memorizing these.

If you’ve played any other form of rummy before then, gin rules will make perfect sense, and you’ll be ready to play your first game in no time.

The Objective of Gin Rummy

The objective of gin rummy is to complete the round before your opponent, and you can do this in one of two ways:

The overall objective of gin rummy is to be the first player to reach 100 points, which we’ll discuss shortly in the scoring section. 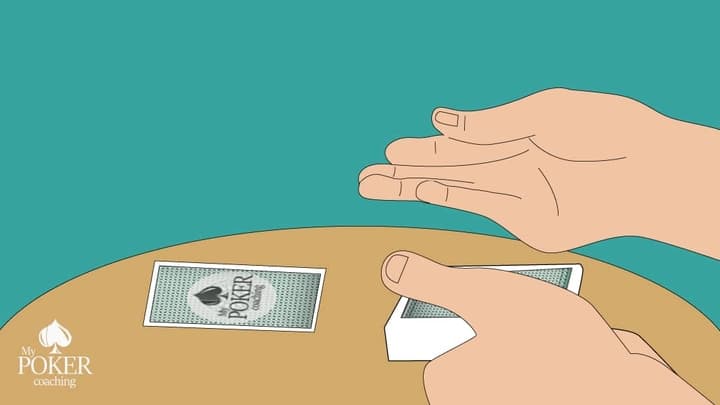 At the start of a round, each player receives ten cards. Cards are dealt face down and one at a time.

When the dealing is done, the rest of the deck is placed in the middle of the table, and the first card from the top is turned over and placed next to the deck, starting the discard pile.

In gin, cards are counted from the lowest to the highest, and aces are low. So, when counting points, here’s how things break down:

Because aces only count as low, they can only be used as such when forming runs. For example, A, 2, 3 of the same suit is a valid run, while Q K A isn’t.

Scoring might be the most difficult part of the gin rummy rules, but it isn’t that difficult once you get the hang of it.

As mentioned, there are two ways to finish the game, and depending on how the round ends, scores are calculated. 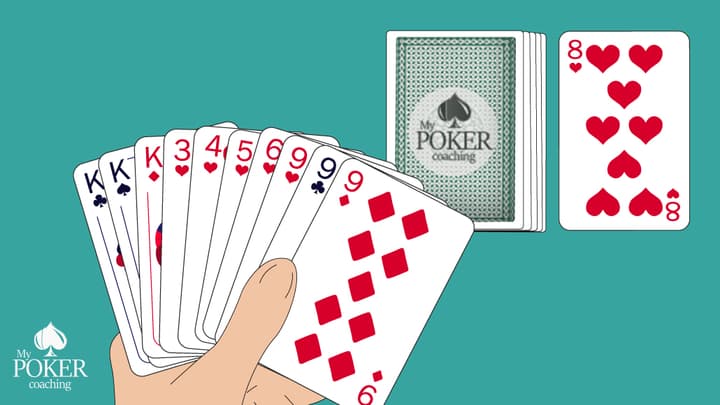 If you go gin, i.e., place all your cards on the table in one go, with all of them forming legitimate runs and sets (commonly referred to as melds), you’ll automatically receive 20 points.

On top of this, you’ll also get extra points for any unmatched cards your opponent is holding.

For example, you go gin, and your opponent has a 3, a 5, and a K that are not part of any runs or sets. You'll get additional 18 points for a total of 38 for that round.

You’re allowed to knock in gin rummy when the total of your deadwood (unmatched cards in the hand, i.e., cards not used in any sets or runs.) cards ten points or less. In this case, you’ll announce you’re knocking and place your completed sets and runs on the table.

The opponent will then be allowed to use cards from their hand to add to your melds, which is known as a layoff.

Once the opponent is done adding cards, the remaining deadwood cards are compared.

How to Play Gin Rummy Game

Now that you know the basic rules and the scoring system of this game, you're ready to learn how to play gin rummy. The gameplay itself is quite simple but exciting.

Playing a Hand of Gin Rummy

Once the dealing is done, and the first card is turned over from the top of the deck, the player who wasn’t the dealer for the round gets the first option.

They can either take the first discard or pass on it, moving action back to the dealer.

The dealer has the same option, i.e., to either take the discarded card or pass on it, in which case the action goes back to the first player.

If one of the players likes the card, they will take it and discard another card from their hand. Otherwise, the non-dealer player will start by drawing the first card from the top of the deck.

When you draw a card, you can choose to keep it and discard a card from your hand face up onto the discard pile, or you can throw it away. The other player then chooses to either take the discarded card or draw one from the deck, etc.

The action continues with players taking turns drawing one and discarding one card each turn to improve their hand and achieve one of two possible ways to win (gin or knock). 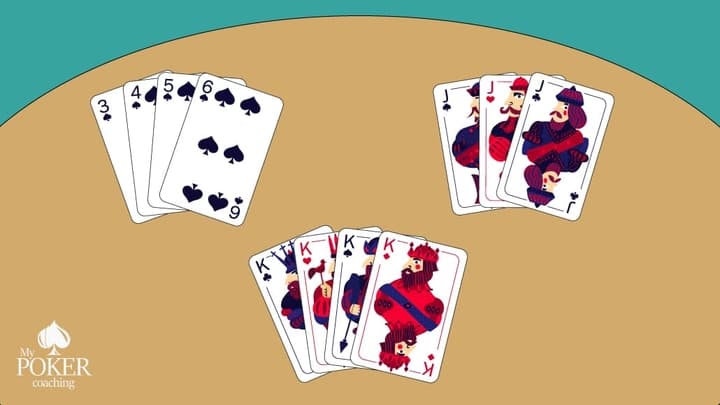 According to rules for gin rummy, legal melds can be formed as sets or runs.

Once again, aces are low in gin, so they can't be used at the top of high runs ending with a king.

How to Win in Gin Rummy – Strategy And Tips 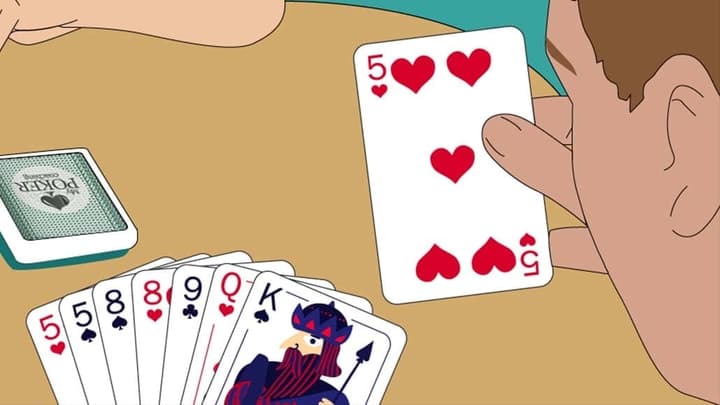 Your goal in each round of gin rummy card game is to make as many points as possible. Sometimes you’ll want to go for a gin, and sometimes knocking will be a better option.

A gin card game is usually played to 100 points and the first player to reach this mark is the winner.

Of course, you can keep playing beyond this mark as well if you want. That’s simply the matter of agreement between you and your opponent, especially in a game that’s not played in any official capacity.

If you enjoy reading poker tips, you’ll probably appreciate the fact that the gin rummy game also has a rather important strategic element to it.

It’s not enough to just learn the rules to know how to play gin rummy well.

You might not notice this while playing with your friends, but if you happen to come across a really good gin player, you’ll quickly realize that there is more to the game than meets the eye.

Here are a few useful tips and tricks to get you started on the right track, which should help you achieve better results and win a few extra games.

One of the most important things in almost all rummy variations is to stay focused on what your opponent is doing.

Keep track of what they’re discarding and make a mental note of any discarded cards they pick up.

This will give you an idea of what they’re likely to be holding.

The benefits of this are twofold: you’ll sometimes be able to block them from going gin by holding onto the card they need, and you can give up on certain combinations of your own if you figure out that the card(s) you need are likely to be in your opponent’s hand.

Try to tailor your strategy to get rid of as many high cards as you can as quickly as possible, as this will make the game much simpler.

First of all, every picture card that isn’t a part of meld is worth ten points, which will make it harder for you to knock.

Secondly, if your opponent knocks or goes gin, having unmatched high cards in your hand will give them a lot of free points, which is something you want to avoid if at all possible.

If you have a solid hand that can knock early on in the game, you should definitely consider the possibility, even if your deadwood count is high.

Even if you have like nine or ten points, if you do it early enough, the chances are good that your opponent won't be able to undercut you, and you'll win some quick and easy points.

The longer the game goes on, the less inclined you should be to knock weak. If any cards have been drawn, your opponent isn't very likely to have much deadwood in their hand. If you knock weak, you're much likelier to get undercut.

You don’t want to be taking discards just for the fun of it. Only take cards that can complete sets or runs. Otherwise, you’re better off drawing from the deck and trying to get a card that really helps your hand.

In addition to passing on an opportunity to improve, you’ll also be giving free information to your opponent every time you take a discard.

This is not something you want to do, especially if playing against a competent ginrummy player. 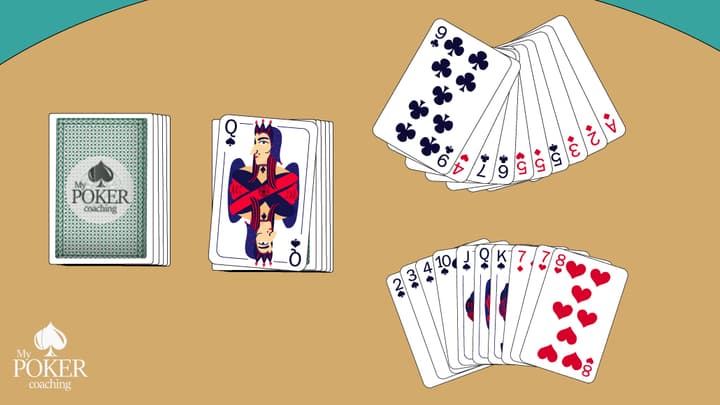 If you’ve come this far, you should know all there is to know about gin rummy rules, scoring, and gameplay. You’re ready to dust off the old deck, invite a friend over, and give it a try.

As far as gin rummy strategies are concerned, these will take you some time to learn.

They seem very simple and natural at first glance, but it will take some practice to become good at keeping track of the cards and understanding how this can help you make better decisions.

All in all, the gin card game, just like the spades game, is one of those classic games that you should take the time to learn.

It’s a lot of fun to play and, once you get better at it, it can be quite competitive!