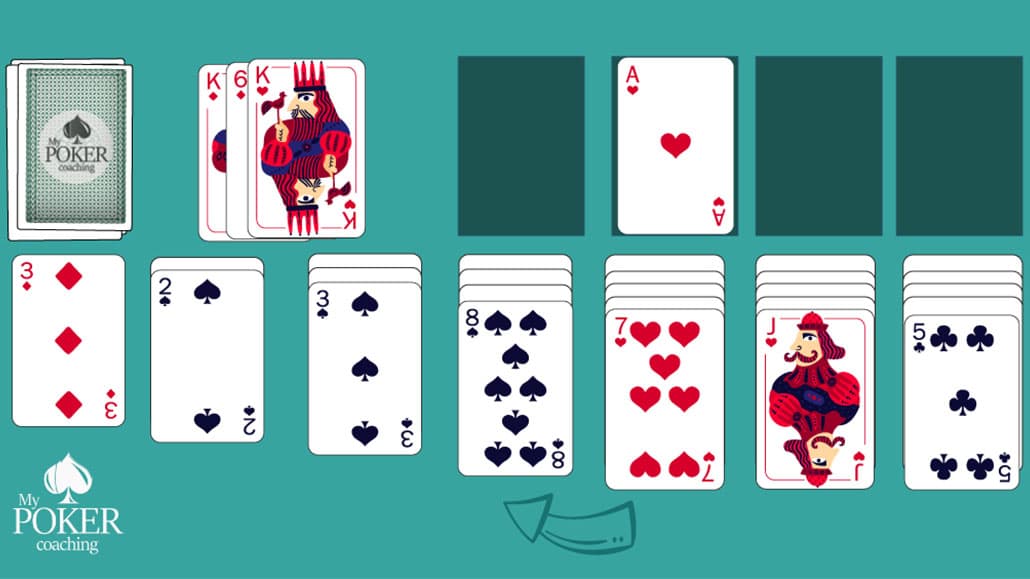 Playing cards is one of the favorite pastimes for people all over the world. Ideally, you want to play a game against other people, but that's not always possible.

Sometimes, there is no one you can invite to come over for a few poker hands, or you might be stuck on a long journey all on your own.

Even in these scenarios, as long as you have a deck of cards readily available, you’ll be able to have some fun and pass some time by playing solitaire.

The solitaire card game was designed for play by a single player, and the game doesn't require a lot of space.

Thus, you can play a game of solitaire pretty much everywhere. The rules may seem a bit complicated at first, but they really aren't. After a few games, you'll figure out everything you need to know.

If you like Solitaire, try out Freecell and Spider Solitaire!

Other Places To Play Solitaire Online

There are numerous options to play solitaire on your browser and apps. All these games offer standard gameplay, but some have unique features, so here are a couple of sines we recommend trying:

If you are still looking to set this game at home or want to learn solitaire rules or how to actually play it, make sure to read all of the info below.

All you need to play solitaire is a standard deck of playing cards.

You don’t even need wild cards as these aren’t used in the traditional game.

Other than cards, you just need a bit of space. Any table will do, even the small one you can find on a train or a plane.

A bigger playing area is definitely better as it will give you a better overview, but it's not necessary.

That’s all there is in terms of preparations. You don’t need anyone to play with; you don't need a pen or paper or anything else. Simply break out the deck, shuffle the cards, and you’ll be good to go.

There are many different solitaire variations, and since you're playing the game against yourself, you are also free to tweak them as you see fit.

That said, this article will focus on standard solitaire rules for the game played with a single deck of cards.

The ultimate goal of the solitaire card game is to transfer all cards from their starting positions onto the foundations.

If you can do this while observing all relevant solitaire rules, you win the game and deserve the right to pat yourself on the back.

The first order of business is learning how to set up solitaire. This is the most important and possibly the trickiest part of the game.

Once you learn it, though, it will become almost second nature to you, and you'll be able to set a game up in a matter of seconds.

Once you’ve shuffled the cards, you can start spreading them across the table.

There are four main areas of the solitaire setup that you’ll form as you deal the cards:

How To Set Up Solitaire Tableau

You’ll start by first setting up the tableau, i.e., the seven piles in the middle of the table. The way to do this is as follows:

Follow this pattern until you reach the solitaire set up, where the final (seventh) pile has six cards facing down and one card facing up.

Place the remaining cards (the stock) face down above the tableau, usually in the top left corner.

Congratulations, you're now ready to play your very first game of solitaire. Do note that the other two piles, i.e., the foundations and the talon, don't have any cards in them, to begin with.

This will change as you start the game.

How to Play Solitaire

Luckily, learning how to play Solitaire card game is quite easy. When you first start a game, you’ll have several cards facing up that you need to manipulate to achieve the ultimate goal of transferring all the cards into the foundations' section.

You’re only allowed to move cards from one pile to another following specific Solitaire rules.

When you move a card from one pile onto another, you'll free the next face-down card. You can now turn that card over, and it comes into play.

As you play, you'll gradually discover aces, which are the most important cards in solitaire. When you find an ace, you can move it to the foundations' area to start building that particular foundation (clubs, diamonds, hearts, and spades).

Foundations are filled up in ascending order and must match the correct suit.

For example, you can only place the two of hearts on top of the ace of hearts, followed by the three of hearts, etc.

The goal is to fill every suit, starting with the ace and ending with the king of that particular suit.

If you manage to create an empty space in the tableau by moving the entire row to other positions, you'll create a vacancy. A king of any suit can fill this vacancy to give you more maneuvering options.

If you run out of legal moves with the cards available to you, you can turn over the first card from the stock pile.

If this card doesn't help you, it's moved to the talon (waste) pile, and you can flip another card.

Once all cards from the stock have been moved to the talon, you can start going through them again.

Given that solitaire is a game you don't play against other people, there isn’t much incentive to learn elaborate strategies like in poker, for example. Your main goal is usually to pass some time and have a bit of fun, and it doesn't really matter if you win or “lose.”

However, winning is always more fun!

It’s important to note that not all solitaire games can be won.

Sometimes, cards simply break down in such a way that there is no way to win. No matter what you do or how you play, the game will simply “close down” on you at a certain point.

That said, around 80% of all solitaire games can be won, and if you apply a bit of strategy, you'll be able to come close to this percentage.

As mentioned, some solitaire games will still remain unbeatable no matter what you do. However, applying these strategies will make it less likely you lock yourself out of the solvable game.

Even still, you simply don't have all the information at your disposal, so you'll never be able to win every single game of solitaire that can potentially be won.

These strategies will work most of the time, but every now and again, it will be a counterintuitive move that is required for a win, and you won't be able to see it until it's too late.

This article explains how to play solitaire with cards anytime and anyplace you feel like it. If you're just learning and feel like there is something you're missing out on, I suggest breaking out a deck and giving it a go.

Follow these solitaire rules step by step and take as much time as you need with your first game.

Once you get on with it, things will start to fall into place. Solitaire is one of those games that look more complicated on paper than they are.

The matter is that solitaire is very simple, and you won’t struggle with it after successfully completing a few games.

So, there you have it. Next time you're feeling bored, and there's nobody around to join you for a game of rummy card game or cribbage, you'll be able to have some fun on your own. It may not sound like it, but solitaire can be quite addictive and very enjoyable once you get the taste for it!