How to Shuffle Cards – Learn the Best Shuffling Techniques and Tricks 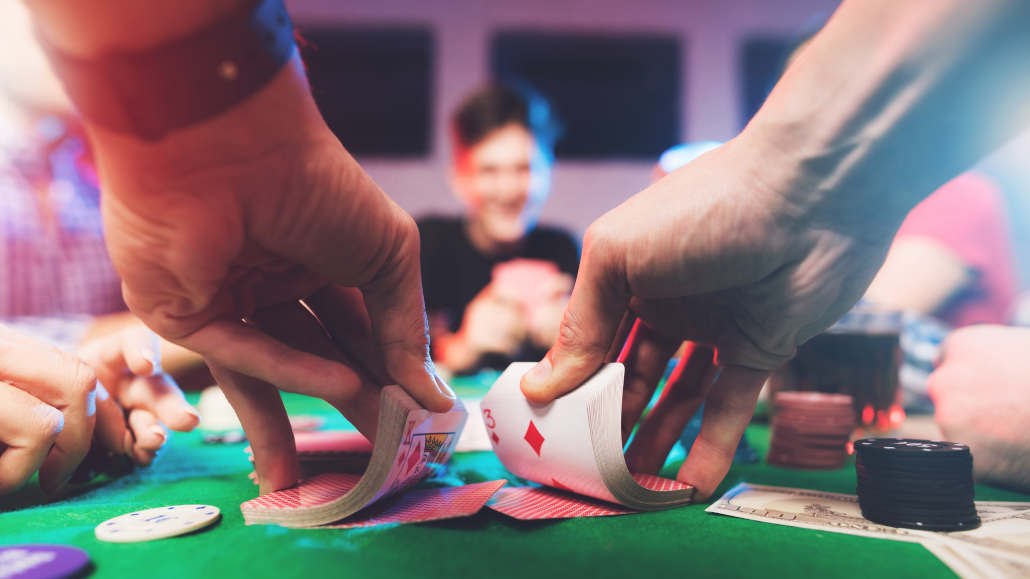 Shuffling cards is as old as card games themselves. It is used to manually randomize the order of cards in the deck, ensuring players can’t predict or guess who got what and which cards still remain in the deck.

For games like poker, shuffling cards is necessary, even if it slows down the pace of the game. But, as you might know, if you ever hosted a home game, the opinions on how to shuffle cards differ.

Some players are very sensitive about this topic and believe how you shuffle cards can have a massive impact on the outcome of a hand.

Whatever you happen to believe personally, I will not go down that rabbit hole in this article.

Instead, I will focus on different shuffling techniques and explain how to shuffle cards in various ways. They all have some pros and cons, so try them out and see what works best for you.

How to Shuffle Cards 101

Looking at it from a simple perspective, there is not much mystery to shuffling cards. If you know the goal is to randomize the cards, you can probably come up with a system of your own that will fulfill this purpose.

But, over the centuries, card games have been around, card shuffling has grown into an art form almost. People have invented different imaginative ways to tackle the problem.

If you’ve ever seen a magician or an experienced casino dealer show their skills, you probably know what I’m talking about here.

I’ve never given too much thought to the matter. I believe that as long as the cards are shuffled in some way, it’s good enough to ensure no one can predict their distribution. Everything else is really down to luck or variance.

But, if you want to become a dealer or host a home poker game, you’ll need to learn how to shuffle cards properly. Some of your players will probably demand it. Plus, if you know a few cool ways to do it, it can help make the evening more entertaining.

Before we move on to any of the fancy stuff, let’s sort out the basics. There is one particular card shuffling technique that’s used as standard and generally accepted as the most effective one. 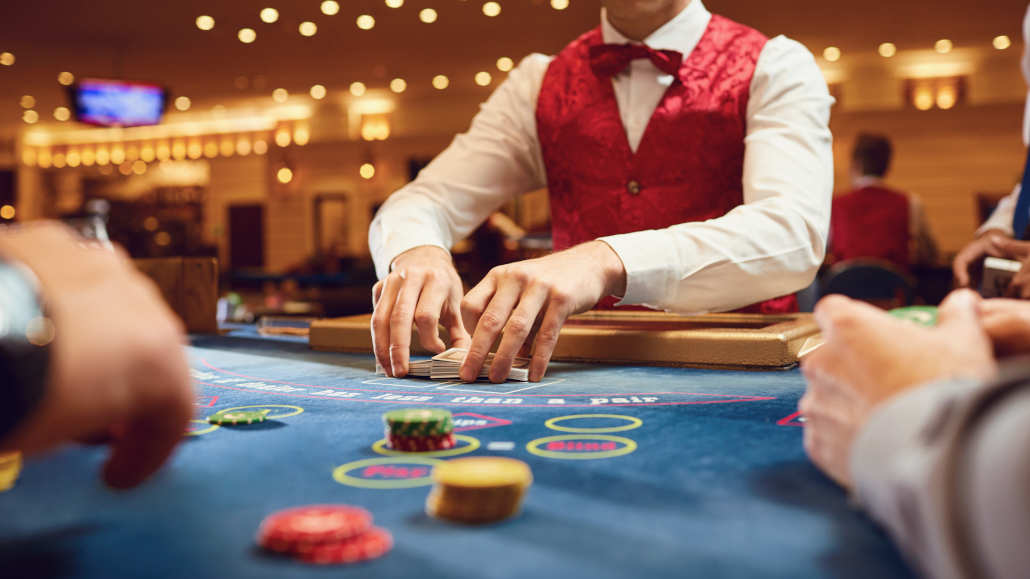 I'm talking about the riffle technique you've probably seen used by the dealer at your local casino at poker and blackjack tables.

The dealer will cut the deck into two and then “leaf” the cards from the two halves together by bending them slightly on the edges and pushing them together. They’ll usually repeat this process a few times (in most casinos, the standard is three shuffles).

This is one of the most effective shuffling techniques for a couple of reasons.

First of all, it achieves the main goal of randomizing cards in the deck. After three full riffles, you can rest assured there is no way to predict the position of any card.

Secondly, it’s quite fast (unlike some other card shuffling tricks and techniques), which means the waiting time between hands is short.

The only thing you should pay attention to when using this technique is not to bend the cards too much. If you do, players at the table might be able to see card values and get a good idea of where some cards in the deck ended up.

A shuffling technique especially popular in poker games, washing the cards is usually done before the riffle shuffle.

It will happen after the end of the hand as the dealer collects all the cards from the players, the muck, and the remainder of the deck.

They’ll take all of the cards, put them in the middle of the table. Then, they'll mix them across the felt using their palms using circular motions.

After doing this for a few seconds, the dealer will gather all the cards into the deck and proceed to perform the standard riffle shuffle.

When these two techniques are used together, you achieve almost the perfect result (provided there is no cheating going on). This is why most casinos and poker rooms have adopted this practice.

It protects their games and put the players’ minds at ease.

Of course, this still won't be enough for some players, and they'll continue to complain about card shuffling every time they're dealt a bad hand or experience a cooler. But that's just the superstition on their part.

While these two techniques are used widely in casinos and official games, there are many other ways to shuffle cards. It’s probably safe to say that most of them are inferior to the ones described above, but people still use them. 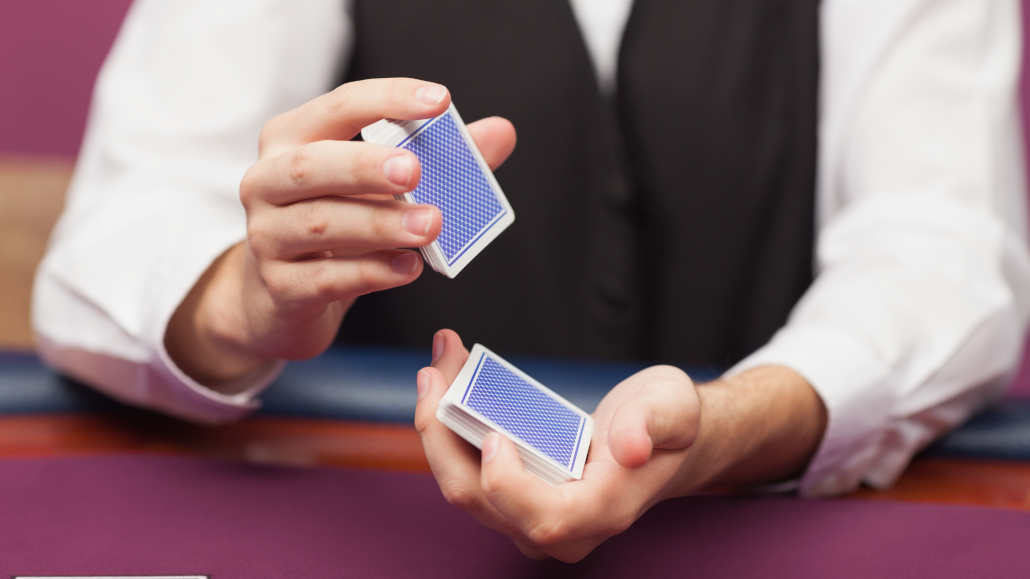 Learning how to shuffle cards using these other techniques can be useful, though, as they might be more convenient for games like rummy that are sometimes played with two decks. In these situations, the riffle shuffle isn't always the best option, especially for less experienced players.

This is probably one of the first ways to shuffle cards you learned as a kid. If you played some games with your parents or grandparents, they have likely used this technique.

The basic idea is to take a small chunk of cards and move them on top of the rest of the deck. You can repeat the process for as long as you want, moving several cards from anywhere in the deck on top of the deck.

While easy to perform, the overhand card shuffle has its drawbacks. Some of the cards from the previous hand will often stick together even when the shuffle is done.

This might not be a big problem in a game like Texas Hold’em where every player is dealt one card at a time, but in games where players receive two, three, or more cards at once during the deal, it can create some issues.

This particular technique is favored by those who love card shuffling tricks as it looks pretty cool once you learn to do it right.

That said, it may take you some time to become really proficient at it, and I wouldn't recommend it if you're just starting to learn how to shuffle cards.

You place a deck onto the table and then proceed to move a small section of cards somewhere from the middle on top of the deck. You keep repeating the processes for some 30 seconds, ensuring the desired effect is achieved. 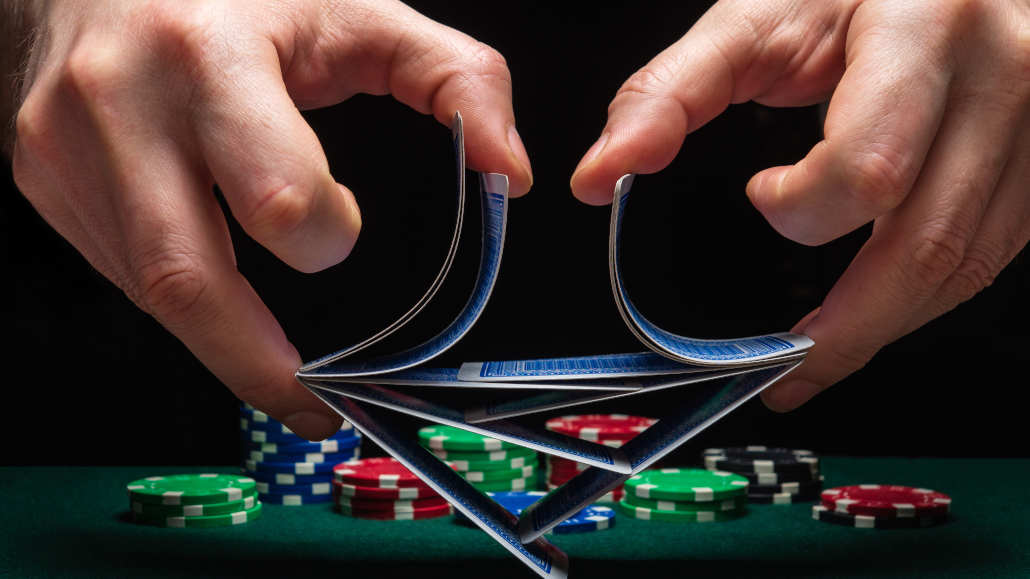 The technique is also known as “running cuts” because you take small “cuts” out of the deck and move them around.

While it's definitely a solid way of shuffling cards, it suffers from the same drawbacks of the overhand shuffle, potentially keeping a group of cards from the previous hand together.

Of course, this problem can always be avoided pretty easily by implementing some card washing before putting the deck together.

This technique is very similar to the strip one, except it’s done without placing the deck on the table. Instead, you’ll hold the deck in one hand and use the other hand to take out the “cuts” and move them around.

When you learn to do it quickly, it’s a neat card shuffling trick, but you should only use it in friendly games.

In a more serious setting, players don’t appreciate any card shuffling techniques that look suspicious, and keeping cards in your hands for the entire duration of the shuffle certainly doesn’t inspire confidence.

If you’re not a card mechanic, this may not make much sense. However, it’s much easier for cheaters to rig the deck however they want if they're allowed to have full control of it. Of course, if you're playing a game of Crazy Eights with your friends, this shouldn't be a concern.

You probably shouldn’t use this technique in any of the games involving more people, but you’re here to learn how to shuffle cards, so we might as well mention it.

As the name suggests, this approach involves creating several piles and then placing one card on top of each one. When you get through all the piles, you start at the top and repeat the process until you're out of cards.

After that, you pick up the piles in random order and put them together.

This is a pretty slow and not very effective way to shuffle cards, but I’ve seen it used by some people when playing solitaire.

I guess it has some merits to help “unpack” the cards after arranging them in large columns by value and suit, but you can achieve the same effect with the riffle shuffle.

On the other hand, if you’re playing solitaire, you’re probably in no rush to go anywhere, so this is almost like a mini-game of its own.

How to Best Learn How to Shuffle Cards?

You can read all the articles you want and watch all the videos out there on ways to shuffle cards, but these can only go so far. Yes, they'll help you get some ideas and figure out what's the best way to go about it, but they won't make you good at card shuffling.

The best way to learn how to shuffle cards is by taking the deck and trying out these techniques for yourself.

At first, you'll probably be really bad at it, and there'll be cards all over the place, especially with some of these techniques. Don't let this bother you, though.

Learning card shuffling tricks and techniques can take a few days or even a few weeks, but if you love to play card games, these skills will certainly come in handy.

Plus, you can always use them to impress your friends once you become really good at it. 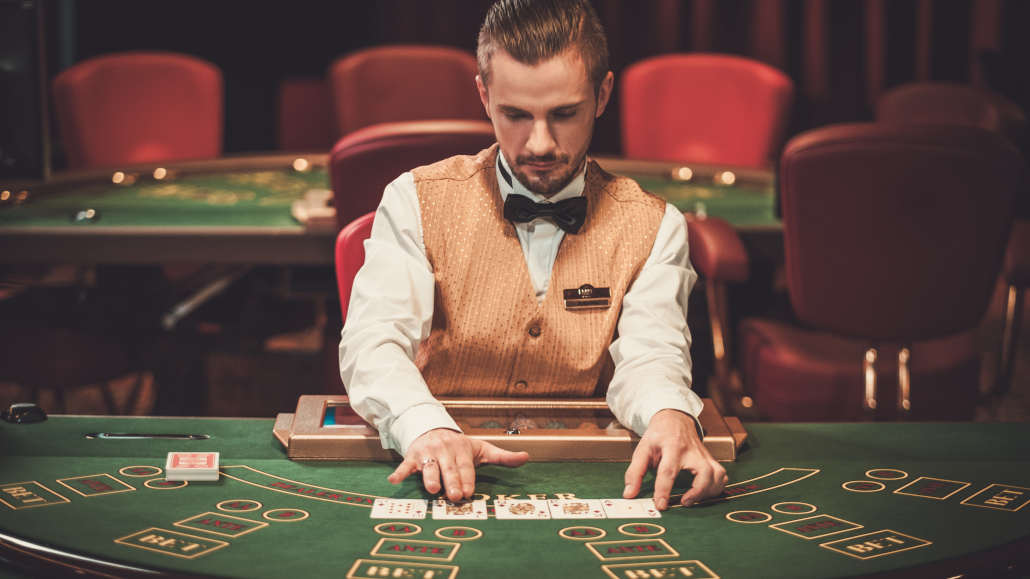 It’s just like learning poker chips tricks. On the first few attempts, it might feel like you’ll never get the hang of it. After a little while, you’ll start seeing some progress. And then it’ll just get better and better with time and practice.

What’s really nice is that you probably don’t have to find some special time in your day to practice, either.

As soon as you master the basics (so that you don't drop the cards), you can take the pack with you during your daily commute, for example, and practice while on the train or the bus. You’ll use the time learning something new and keep your hands occupied.

If nothing else, it could be a nice change from staring at a phone screen.

In all fairness, you might get a few strange looks from other passengers. However, it can also be a great conversation starter.

I’m not going to try to give any social advice, though, just throwing it out there as an extra point.

Whether you're a card games aficionado or have more serious plans for a career involving gambling, learning how to shuffle cards will come in handy.

It's one of those skills that can be applied in many different situations, and it doesn't take too long to learn.

In this article, I’ve presented some of the more popular card shuffling techniques, but you can always find more or even come up with your own. I know people who can actually shuffle the deck with one hand, and that’s pretty impressive.

The bottom line is, have fun with it and let your imagination go to work.

You probably don’t need to become a card shuffling master, but becoming one can’t possibly hurt you, either.

If you discover you have a talent for handling cards, learning how to shuffle could just be the beginning. 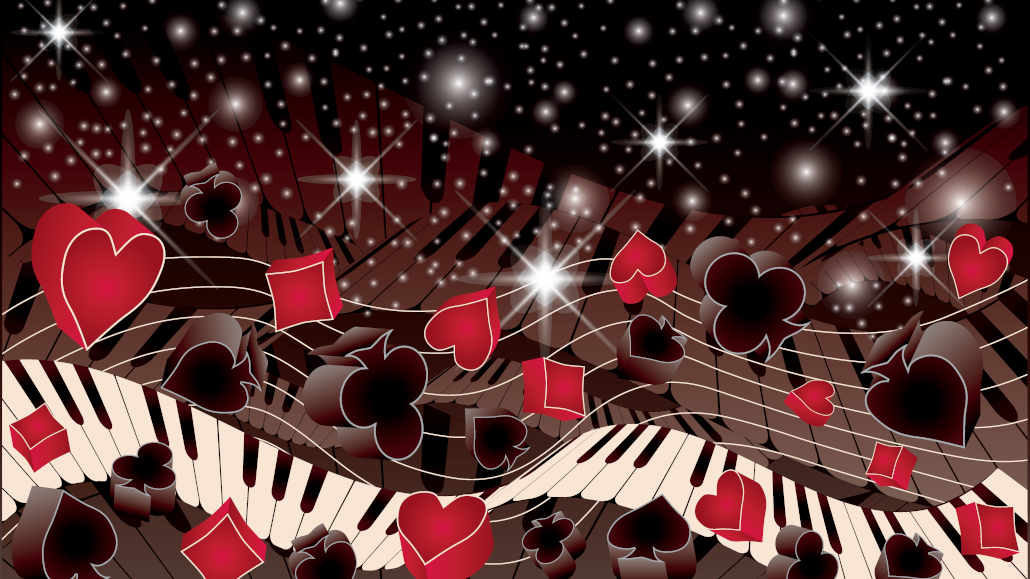 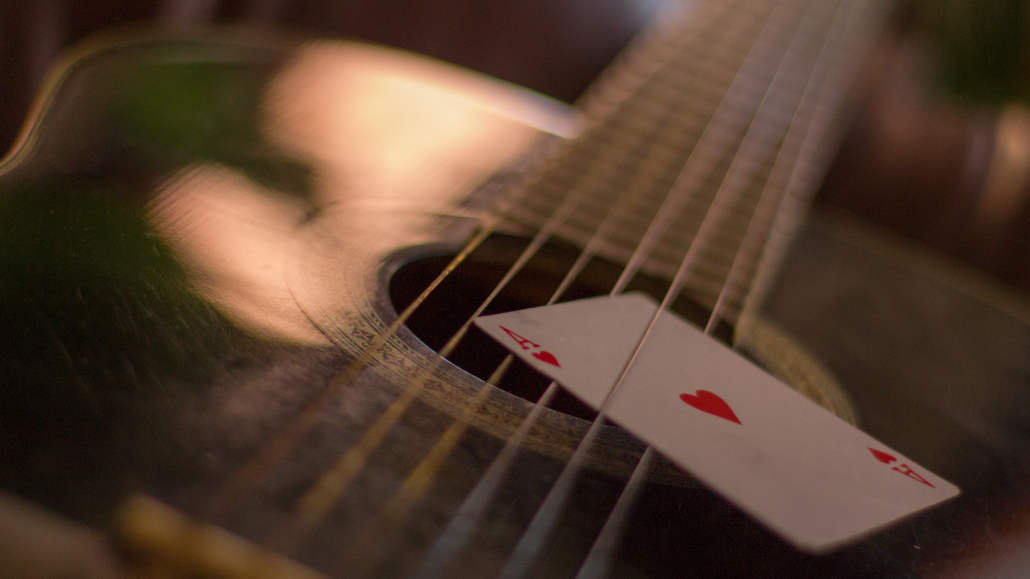 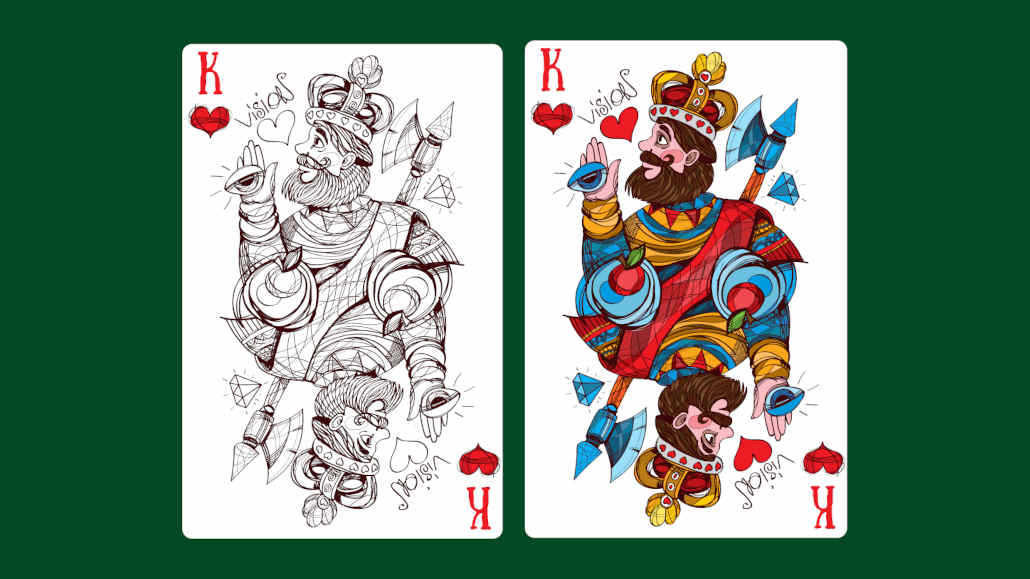