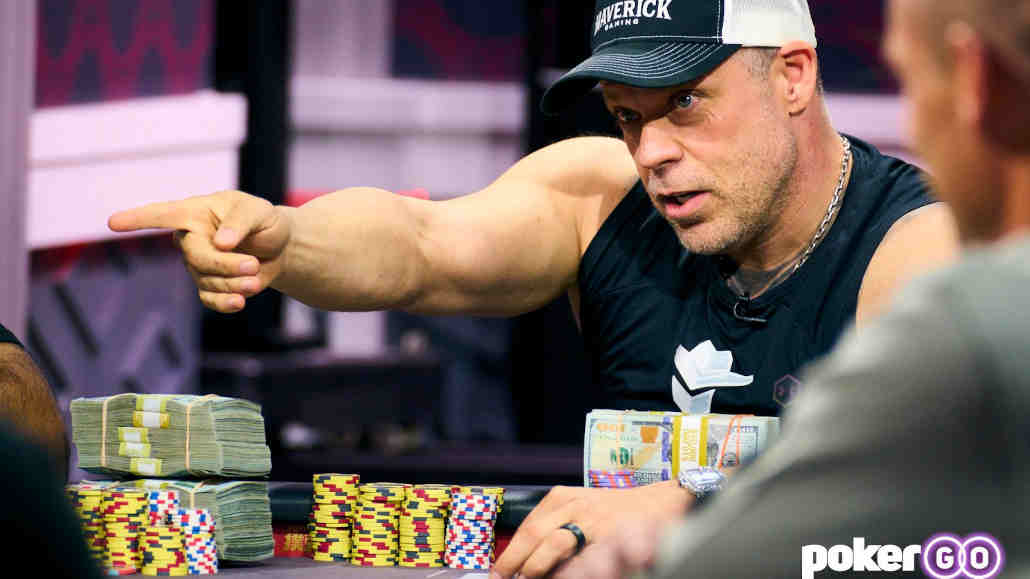 The latest episode of High Stakes Poker saw some changes in the lineup, with a couple of brand new players joining the mix.

Stanley Tang, a cofounder of DoorDash, took his seat, ready to mix things up. Tang may not be a professional player, but he’s been known to play a few hands of poker, and he certainly has a bankroll to support his high-stakes hobby.

Eric Persson sat down with $750,000 in his stack, covering everyone at the table, including Garrett Adelstein, who had over $600K in front of him to start the night.

Persson is the owner of Maverick Gaming, a company owning 26 casinos across the United States, so he’s no stranger to gambling.

It was a fun night at the tables as the ‘amateurs’ made it their common task to beat the pros, cheering each other on and having a blast. The atmosphere led to some interesting table talk and, more importantly, some rather sizeable pots.

While the amateurs made it their mission to beat the pros, the first big pot of the night happened between Tang and Persson.

At the start of the evening, the 2-7 game was suggested, but the proposal was immediately shut down by Menon, who didn’t want to get involved with all the craziness it could cause.

This didn’t bother Persson, though, as he decided his 7♥2♠ was just the hand to try a big bluff with.

After Garret opened the action with pocket sevens and Tang made the call on the button holding Q♥10♥, Persson in the big blind went for a squeeze of $12,000. 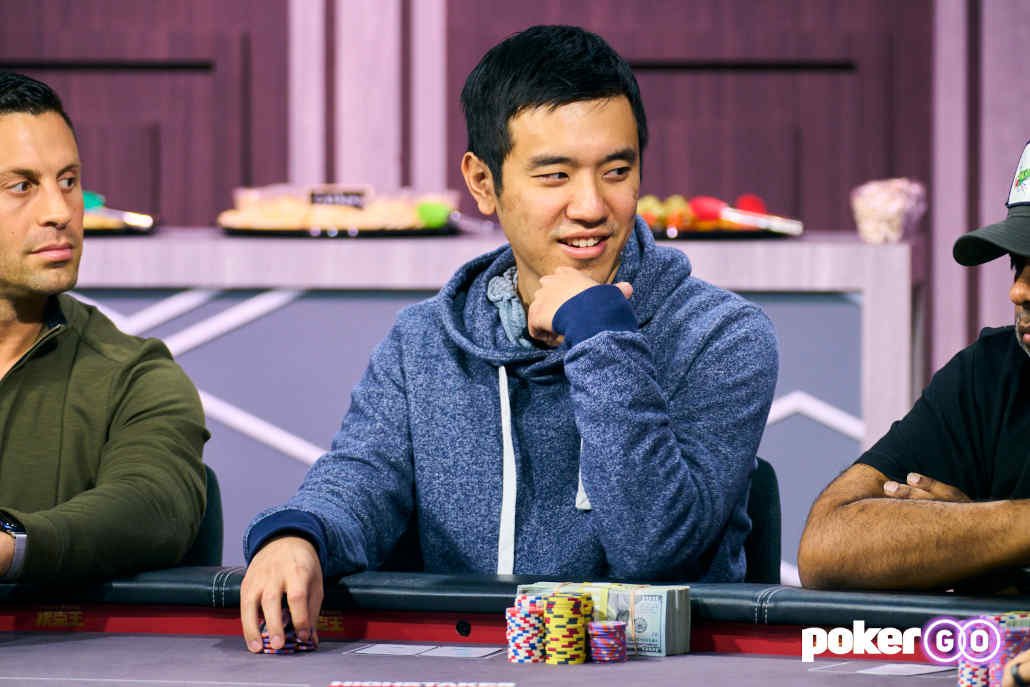 This wasn’t enough to get folds, though, as both Garrett and Stanley made the call, proceeding to the flop of Q♣J♥8♦. Eric started with a check, and the action checked around.

On the 8♠ turn, Persson led out for $22,500, which was enough to get rid of Adelstein, but not Tang, who flopped the top pair and a gutshot straight draw.

The river was an interesting card as it came J♣, double-pairing the board. After some deliberation, Eric went for a sizeable bet of $63,000 into the pot of $82,500, putting Tang to the test.

Stanley went back and forth between his options but eventually decided to let his hand go, allowing Persson to scoop a big pot and proudly show his brazen bluff.

Judging by the table banter, Patrik Antonius was coming off an 18-hour long session he played the day before, and he complained that things didn’t quite go his way.

That trend seemingly continued during this session, as the Fin couldn’t really get anything going until he finally caught a small break in a hand against Bryn Kenney.

Kenney opened the action with A♥K♠, and the action folded all the way around to Patrik in the big blind, who woke up with J♥J♦.

Strangely enough, Antonius decided to just call Bryn’s $3,000 raise, and the two proceeded to see the flop of K♥4♦3♣. Patrik check-called another $3,000 bet.

It was looking like Antonius was about to lose yet another pot, but then the dealer came to the rescue, revealing J♣ on the river.

Patrik didn’t lose his cool, and he checked to Bryn for the third time, inducing what Kenney believed to be a value bet of $23,000.

The Fin took his time playing with the chips before finally announcing a hefty raise of $105,000. Unfortunately for Patrik, the price was too steep for Bryn, who released his top pair fairly quickly.

As the action was coming to a close for the night, we saw the biggest pot of the evening and one of the biggest pots of the season take place between Krish Menon and Stanley Tang.

The action started with Bryn Kenney opening to $3,000 with J♠9♠. Tang, who found A♣K♥ in the cutoff, decided to just call.

With plenty of money up for grabs in the middle and a disguised huge hand, he threw the brick of cash into the middle, making it $50,000 to go.

Without missing the beat, Menon moved all-in over the top for a total of $287,000. After Kenney got out of the way, Tang made the call, and all of a sudden, the two amateurs were flipping for a pot of $590,500. 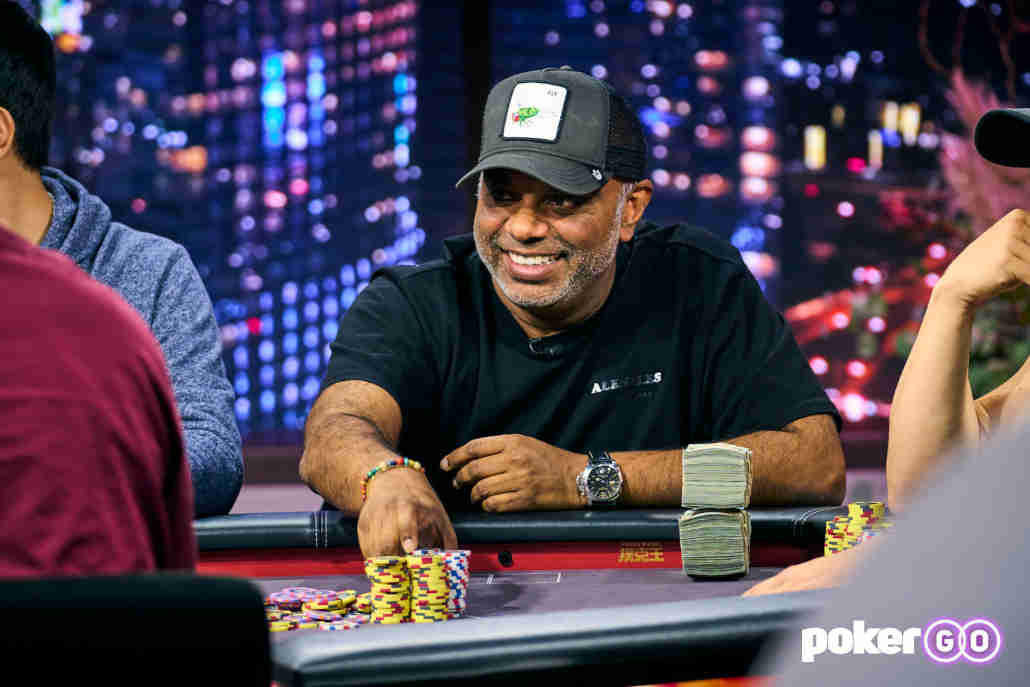 They agreed to run two full boards, and the first runout was a good one for Krish as the flop came A♥10♠5♥.

The turn of K♠ gave Tang some outs, but it also lowered his chances of winning on the second runout. The river came a brick in 3♥, and Menon was now freerolling for the massive pot.

The second board wasn’t nearly as eventful as it came J♣3♣2♥. The turn 4♦ gave Stanley a few additional outs, but once again, the river failed to deliver as it came Q♠, allowing Krish to scoop the nearly $600K pot.

If the first session with the new lineup is any indication, we can certainly expect some fireworks in the next episodes. There is plenty of money on the tables, and no players are action-shy, so we could see a seven-figure pot before everything is said and done!